The Kingdom got their first gold on Wednesday with success in pencak silat.

Sobri Cheni, Abdulkarim Koolee and Abdulrahim Sidek stunned Indonesia, the birthplace of the martial art, in the final of the men's seni (artistic) regu (team/trio).

The Thai athletes said they had trained together for more than one year.

"It's hard to defeat Indonesia, who are our inspiration, but we did it. We are so happy and excited to beat Indonesia."

Today's opening ceremony of the biennial event, which was originally scheduled for late last year, will take place in Hanoi. Thai women's footballers react after scoring a goal against Singapore.

Jiu-jitsu fighter Suwijak Kuntong will carry the Thai flag at the event.

The Games, which are being held in Hanoi and 11 nearby northern provinces, were delayed for six months due to the Covid-19 pandemic.

With only 11 member nations, there are 40 sports offering 527 gold medals at the Vietnam Games which end on May 23.

The sports include Olympic events such as athletics, swimming, boxing and football as well as regional ones like sepak takraw and pencak silat.

Xiangqi, or Chinese chess which is wildly popular in the host country, will make its SEA Games debut. 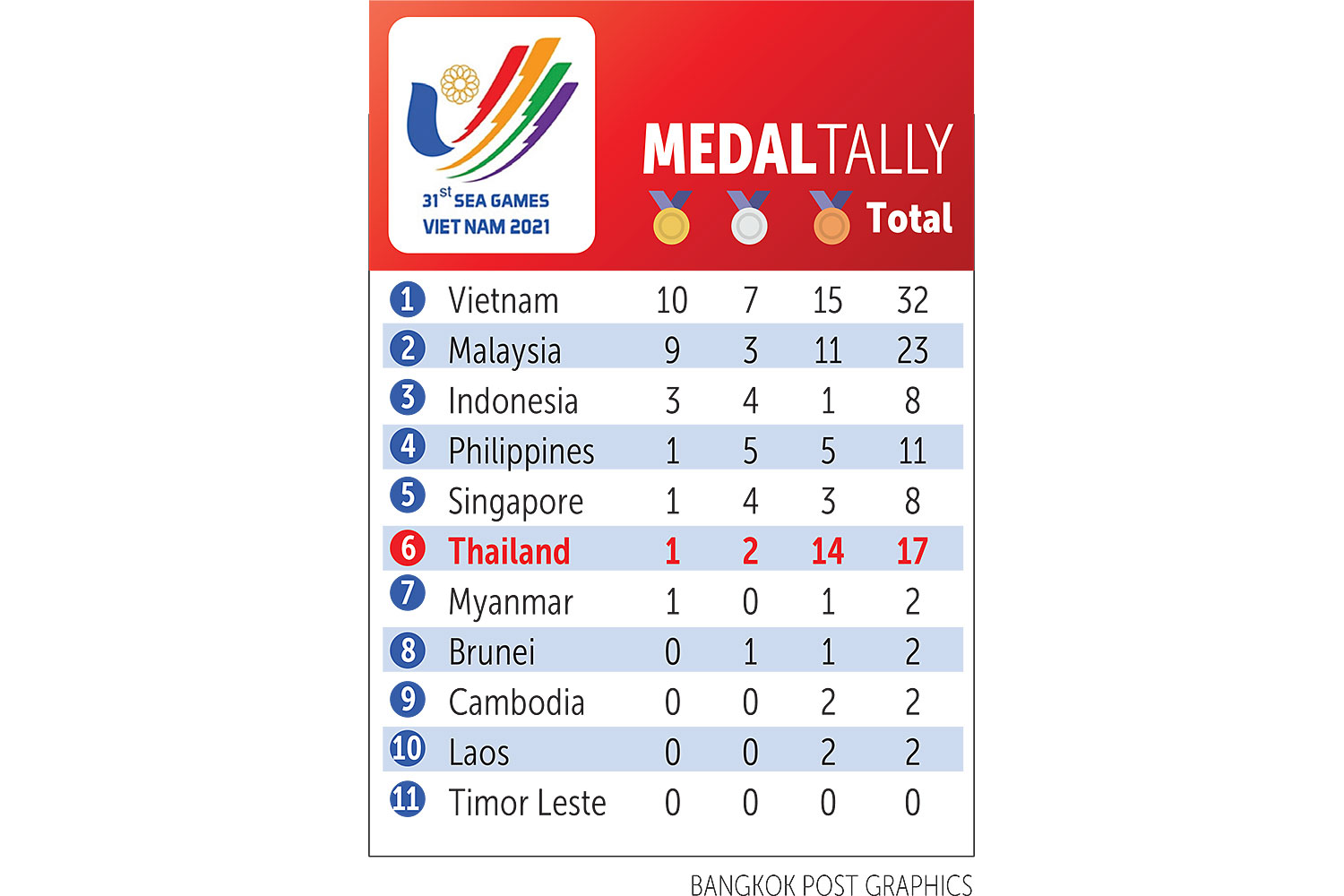 Thailand have been the most successful nation in the tournament, with 13 overall crowns since the event was launched as the Southeast Asian Peninsular (SEAP) Games in 1959.

However, the Thais have failed to finish top in the medal standings in the previous two Games.

The Thais were third overall with 92 golds at the 2019 edition in the Philippines.

Host nations often include sports in which they perform well in an attempt to win as many gold medals as possible, leading to criticism that it detracts from the prestige of the competition.

Thailand have voiced opposition to this and they again complain about this practice.

Thailand are sending 189 athletes to Vietnam and the Sports Authority of Thailand (SAT) aims for the squad to win 112 gold medals.

SAT governor Gongsak Yodmani said the number should be good enough for Thailand to finish second overall behind Vietnam.

To make matters complicated, Gongsak added that his agency targets the Thais to win 72 gold medals in "international sports".

"We must be the overall champions in international sports at the 31st SEA Games," Gongsak said. 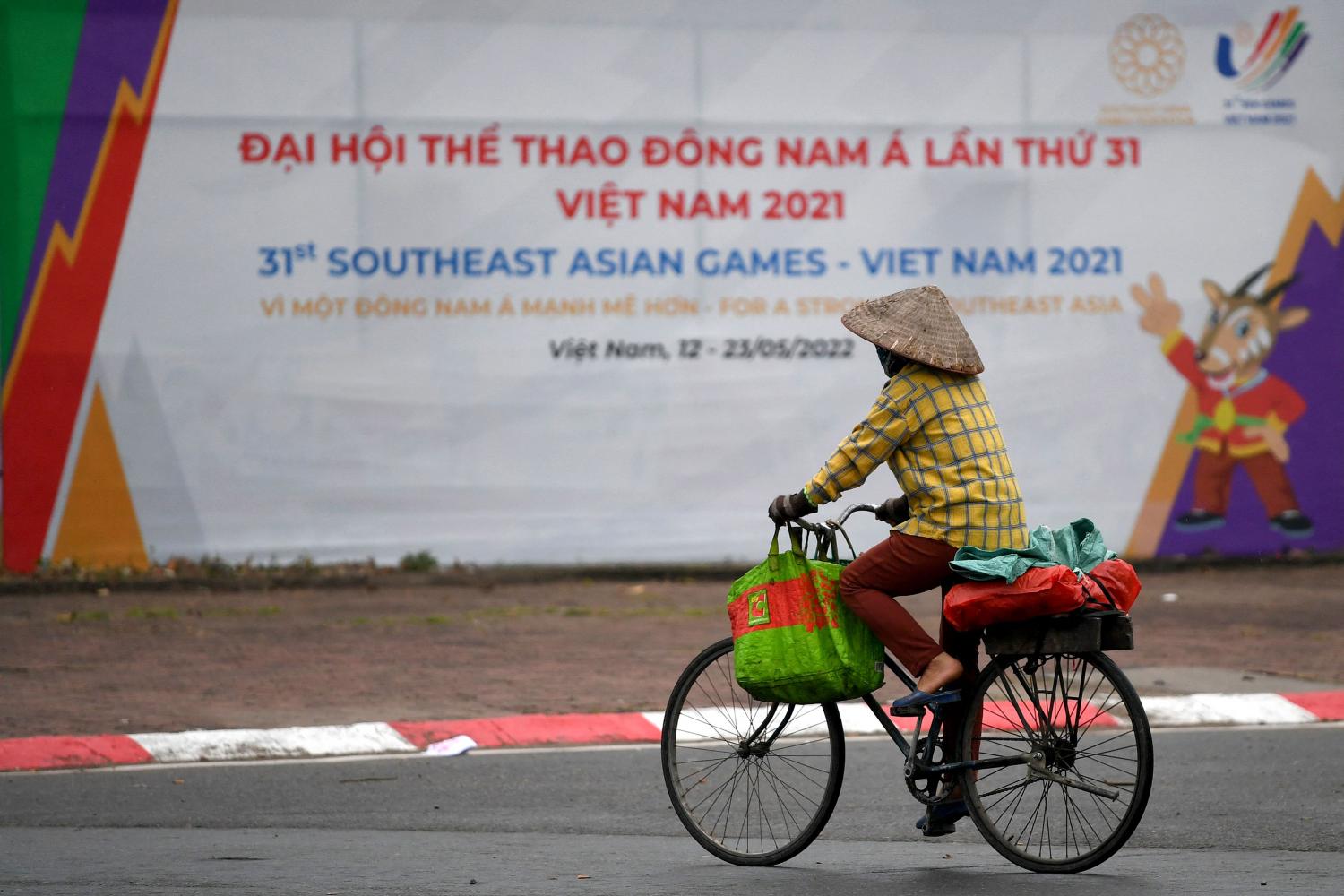 A woman rides her bicycle past a banner for the 31st SEA Games in Hanoi. (Photo: AFP)

According to the SAT's Elite Sports Development Department, there are 22 international sports at the Vietnam Games including swimming, athletics, boxing, cycling, football, weightlifting, golf, taekwondo, rowing, tennis, shooting and triathlon.

These international sports offer 350 gold medals while there are 177 golds up for grabs in what the SAT calls "general sports."

Gongsak said the SEA Games should be a venue for young athletes to hone their skills to become good enough for the Asian Games and the Olympics.

"We should focus on which nations will be better in international sports," he said.

He said host nations often add many "regional sports" to the SEA Games programme and called on future hosts to focus on organising international sports.

Several nations agree with the idea and vow to make the Games more interesting, according to the SAT boss.

"When we host the Games in 2025, I can assure you that we will mainly organise international sports which are events at the Asian Games and the Olympics," he said.

Thailand aim to win 12 gold medals in athletics, 10 in shooting and skeet, eight in rowing, five in boxing, five in sepak takraw, five in Muay Thai, four in football and futsal, three in taekwondo and three in dance sport, among others.

The Thai women's football team got off to a winning start in their bid to reclaim gold, beating Singapore 3-0 in Group B on Tuesday night.