Thai takraw stars in class of their own
Sports

Thai takraw stars in class of their own

Thai sepak takraw players acknowledge the crowd after defeating Malaysia in the men's regu final at the 31st SEA Games in Hanoi on Tuesday. (Reuters photo)

Thailand continued their sepak takraw supremacy, sweeping the men's and women's regu titles at the 31st SEA Games in Vietnam on Tuesday.

In the women's regu, the Thai women beat Malaysia 21-12, 21-9 in their final round-robin match to win the country's 14th title in the discipline.

"I am very happy to win gold in my first SEA Games. I trained very hard -- three times a day, two or three hours each session," said the 19-year-old fighter.

"This is just the beginning as I have a bigger target -- I want to compete in the Olympics."

Meanwhile, Olympic champion Panipak Wongpattanakit will be in action in the women's 49kg class today.

World No.1 and two-time SEA Games champion Panipak has been assured of at least a bronze medal.

The Thai men's football team will face Indonesia and Vietnam take on Malaysia in the semi-finals on Thursday.

The Young Elephants finished top in Group B after defeating Laos 1-0 thanks to an own goal by At Viengkham in the 19th minute on Monday. 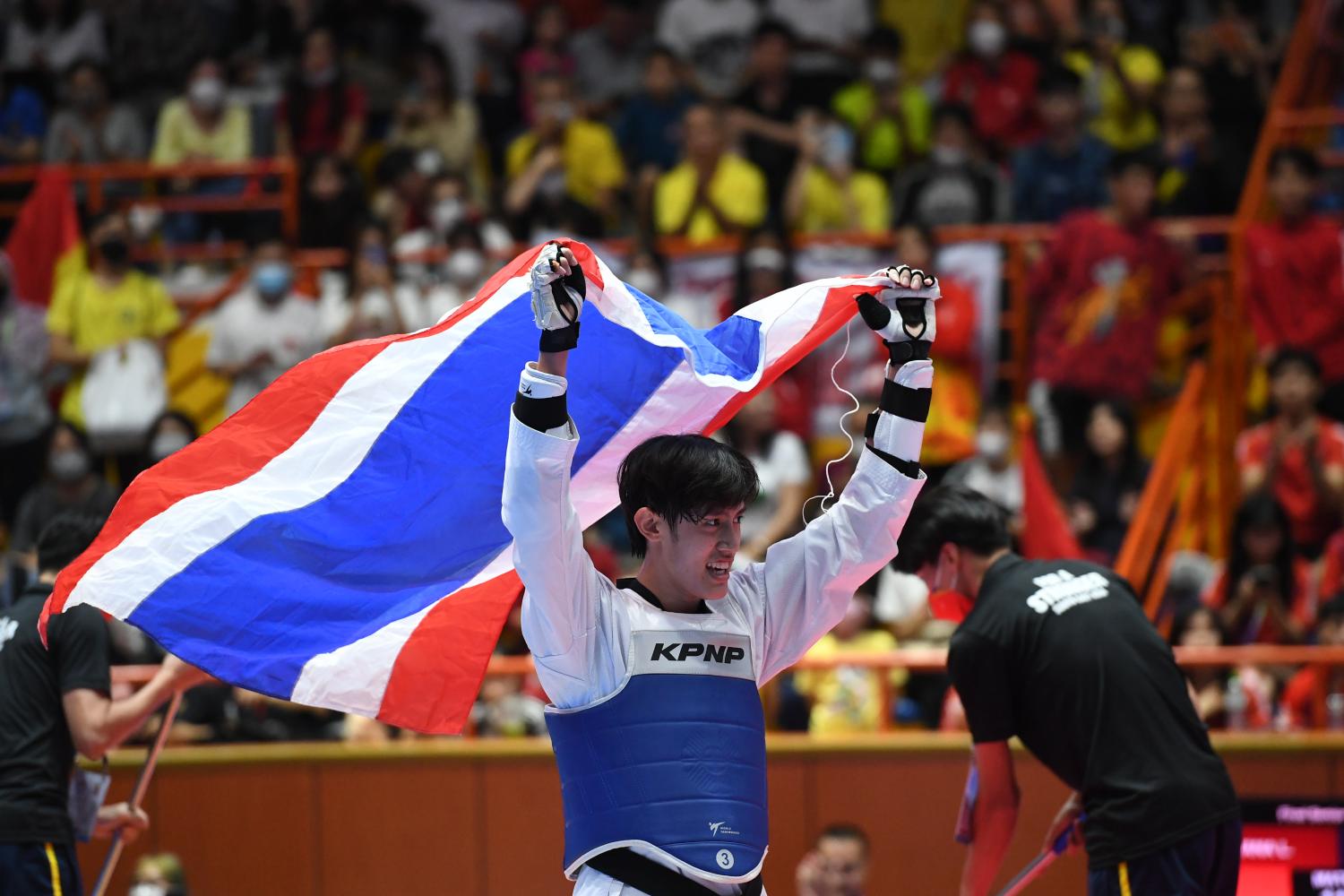 "Indonesia played well in the preliminary round and their players have played together for quite a long time," said Thailand coach Mano Polking.

The men's football event at the SEA Games is for U23 players.

Polking guided Thailand's senior side to beat Indonesia over two legs in the AFF Suzuki Cup final in January.

Thailand are seeking their 17th men's football title. Vietnam are the defending champions.

Meanwhile, the Thai women's football team face the Philippines in the semi-finals today.

The Philippines stunned the Chaba Kaew at this year's Asian Championship and the Thais are eager to avenge the loss which saw them miss out on an automatic berth at the 2023 Women's World Cup.

Singapore's English-born Peter Gilchrist saw his remarkable run of six billiard golds in a row at the SEA Games dating back to 2009 come to a crashing end yesterday.

The 54-year-old, who was born in Middlesbrough in England, suffered a surprise 3-1 defeat to Myanmar's Pauk Sa in their English Billiards final and had to settle for silver.

Gilchrist was Singapore's coach at the Games in 2003, but three years later he took up citizenship in the city state under a special scheme for foreign athletes.

He then played for Singapore's national team before being named twice the country's Sportsman of the Year.

Despite tasting defeat and being in the twilight of his career, Gilchrist is determined to go for more SEA Games gold, starting in Cambodia next year.

"I'll try to win in Cambodia in a year's time, and maybe go on another six golds running streak, who knows?" he laughed.

"I'd love to keep on playing."

'Are you a ladyboy?'

Men dancesport athletes at the SEA Games say they had to overcome dated stereotypes to reach the top of competitive ballroom dancing.

But afterwards Thanawan spoke for Issarapong about the challenges that he and other men dancers in socially conservative Southeast Asia must overcome as they pursue their sport.

"Somebody always asks 'If you do dancesport, are you a ladyboy?'" she told AFP, as Issarapong looked on. "No, it's not. It's like a man dancing ballet or a man dancing K-Pop, it's like that," she added, saying that views of men doing ballroom dancing are slowly changing.