A banner in the colours of Russia's national flag and depicting an image of Chelsea's Russian owner Roman Abramovich, is pictured in the stands during the English Premier League football match between Chelsea and West Ham United at Stamford Bridge in London on April 24, 2022. (Photo: AFP)

LONDON: The UK government announced Wednesday it had given the green light to Todd Boehly's proposed takeover of Chelsea football club from the sanctioned Russian oligarch Roman Abramovich.

Secretary of State for Digital, Culture, Media and Sport Nadine Dorries said she had issued a licence permitting the deal late on Tuesday, shortly after it won approval from the Premier League.

"We are satisfied the proceeds of the sale will not benefit Roman Abramovich or other sanctioned individuals," Dorries tweeted.

"Given the sanctions we placed on those linked to (Vladimir) Putin and the bloody invasion of Ukraine, the long-term future of the club can only be secured under a new owner," she said.

A consortium led by Boehly, a co-owner of baseball's Los Angeles Dodgers, had already agreed a record £4.25 billion ($5.3 billion, 180 billion baht) deal to buy the Premier League club from Abramovich on May 7.

The Premier League said its approval hinged on the government sale licence "and the satisfactory completion of the final stages of the transaction".

Officials wanted everything completed on Tuesday so Chelsea could meet all registration deadlines for next season's football competitions.

Abramovich put Chelsea on the market in early March, just before he was sanctioned by Britain following Russia's invasion of Ukraine.

Completing the purchase has been a lengthy process due to government concerns over the potential for Abramovich to profit from the sale.

The total value of the deal smashes the previous record for the sale of a sports team -- $2.4 billion for the New York Mets baseball franchise in 2020. 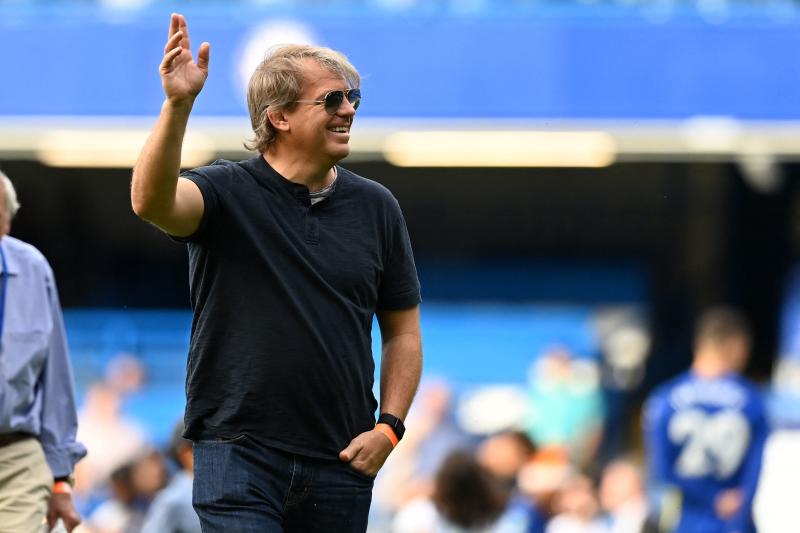 Chelsea's prospective US owner Todd Boehly comes onto the pitch to join the lap of honour after the English Premier League football match between Chelsea and Watford at Stamford Bridge in London on Sunday. (Photo: AFP)

Chelsea have been forced to operate under a special licence from the government since Abramovich, who bought the club in 2003, was sanctioned.

Abramovich, also the target of European Union sanctions, was described by the UK government as part of Russian President Putin's inner circle.

The Chelsea Abramovich will leave are dramatically different from the club he bought in 2003 for just £140 million at a time when Manchester United and Arsenal were the dominant forces in the Premier League.

The club were transformed from also-rans teetering on the brink of a financial crisis into one of the richest in the Premier League thanks to the deep pockets of the Russian, who routinely bankrolled blockbuster transfers.

He has been rewarded with a staggering 19 major trophies in his 19-year reign -- including five Premier League titles and two Champions League triumphs.

Abramovich's arrival at Stamford Bridge also set a trend for a wave of foreign investment in the Premier League.

The Blues also reached the finals of English football's League Cup and FA Cup, only to lose both matches to Liverpool in penalty shoot-outs.

Chelsea's 42,000-capacity Stamford Bridge home is in need of major redevelopment to match the stadium size and income streams enjoyed by their rivals.

But Boehly has a track record of delivering both stadium improvement and sporting success with the Dodgers.

Thanks to heavy investment in players, the Dodgers have made the MLB (Major League Baseball) playoffs every season for the past nine years and won their first World Series for 32 years in 2020.