Thailand beat Malaysia 3-0 in their second Group C game on Sunday to stake a claim for a place in the quarter-finals of the AFC U23 Asian Cup in Uzbekistan. 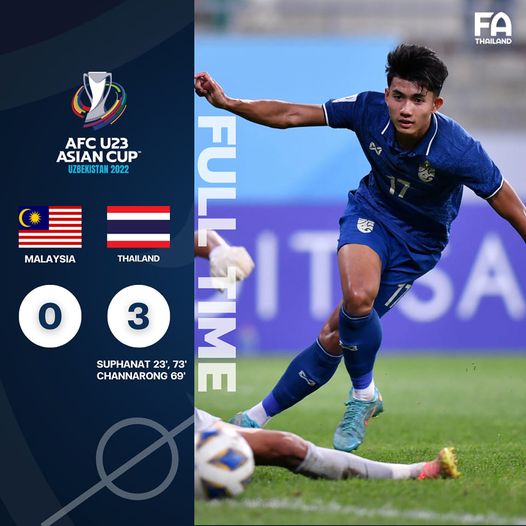 Thailand U23 coach Worrawoot Srimaka told a pre-match press conference on Saturday that he was confident of a victory against Malaysia after seeing the Young Elephants rally twice to tie Vietnam 2-2 in their first group game on Thursday.

"After our game against Vietnam, I had a chance to watch Malaysia's match against Korea Republic and we have identified some areas where we can apply pressure," said Worrawoot.

"Playing against Malaysia is always difficult but I believe this match will be decided by the team that can effectively exploit the opponents' weaknesses.

"Vietnam, Malaysia and Thailand are in the same boat, all three teams are under pressure but we will try to not burden ourselves too much and follow our game plan accordingly.

"We've identified some of the mistakes we made in the previous match. The goals we conceded were all from errors, so we will correct them and add new tactics for the match against Malaysia."

Malaysian coach Brad Maloney said his players are eager to put their opening day defeat to South Korea behind them.

"We're familiar with Thailand as we've played each other recently in the SEA Games and also in the qualifiers," said Maloney.

"I know they've had a few changes in their playing staff.

"We've reassessed our tactics from our perspective and are looking forward to facing them."

"We expect a tough game against Thailand. They are a very good team and I've noticed that they've brought a few players from abroad for this tournament. Nevertheless our players are up for the challenge."