Thailand beat Sri Lanka to set up showdown with Uzbekistan

Thailand beat Sri Lanka for their second win in the Asian Cup qualifying round in Uzbekistan on Saturday. 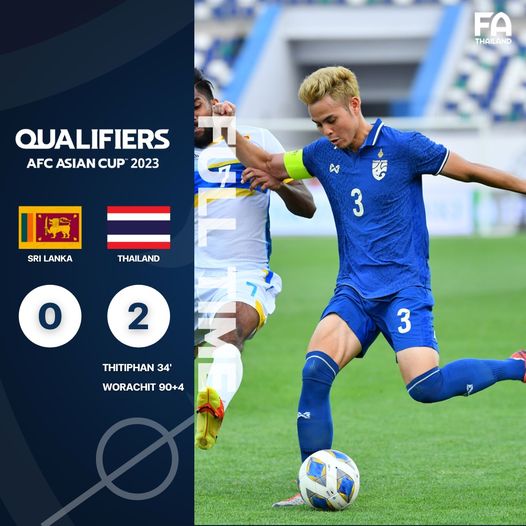 Midfielder Thitiphan Puangchan opened the score for the War Elephants 34 minutes into the game and another midfielder Worachit Kanitsribampen added another four minutes into extra time.

Thailand got off to a good start with a 3-0 victory over the Maldives in their opening Group G game on Wednesday thanks to goals from Sarach Yooyen, Teerasil Dangda and Pansa Hemviboon.

The War Elephants and Uzbekistan, who defeated Sri Lanka 3-0, each have six points but the hosts led Thailand on goal difference after a 4-0 win over the Maldives.

The two team will meet on Tuesday.

Thailand coach Mano Polking said on Friday he hopes his men defeat the Sri Lankans to set up a showdown with Uzbekistan in their last group game.

"We expect Sri Lanka to play like Maldives with tight defending," Polking said.

"The two teams are not much different. We have to continue our momentum to achieve victory [against Sri Lanka]. If we are able to do this, then we will head into the match against Uzbekistan for the top spot in the group."

"We watched them play against Uzbekistan and they did well. They also tried to play counter-attacks. We hope to reach our target."

The Asian Football Confederation (AFC) is still looking for a new host of the 2023 finals after China withdrew from organising the tournament due to Covid-19.

The AFC last month invited bids to stage the 24-team tournament with Japan a possible replacement.