Tang Kai was named the winner by unanimous decision, capturing the belt, and even more significantly, becoming the first male Chinese fighter to win a major MMA title.

ONE Championship featherweight king Tang Kai enjoyed a memorable homecoming as he returned to China for the first time since becoming the country's first male MMA world champ.

"The KO God" - who is based in Phuket, Thailand, where he trains out of the famed Tiger Muay Thai gym - visited his home city of Shaoyang, in Hunan province, this week, where thousands of people showed up to greet him.

"I've got a golden belt, so finally I can go home," Tang said, in a video posted to ONE's official Instagram account. "I got home one year ago, but before that I hadn't been home for six years."

The 26-year-old Tang (15-2) claimed his featherweight belt after beating Vietnamese-American Thanh Le (13-3) by unanimous decision at the ONE 160 event in Singapore last month.

When he arrived at Shaoyang airport, Tang was greeted with hugs from his parents - and a "welcome world champion" sign.

"Thank you for the support," he said, as he was warmly welcomed back by the local people, before going to visit his alma mater, Shaoyang Sports School.

"This is where my dream all began," Tang said, in a speech in front of students at the school.

"I will make sure this gold belt stays in China forever, and to let everyone know there's a world champion from Shaoyang."

Tang then took photos with the students and signed autographs, before being treated to a crowded - and loud - celebratory parade in the streets, with firecrackers, gongs and drums.

According to the martial arts promotion's chairman and CEO Chatri Sityodtong, Chinese fans made ONE Championship the No 1 trending topic in China after Tang's title win.

"Thank you to our amazing fans, I am blown away by the love and support from the beautiful country of 1.4 billion people," Chatri wrote in a post on his Facebook account.

Tang is on a 7-fight win streak in ONE, having earned his title shot with three consecutive first-round knockouts.

His first title challenger could be decided next week, with former champ Martin Nguyen taking on Russian newcomer Ilya Freymanov at ONE on Prime Video 2 in Singapore. 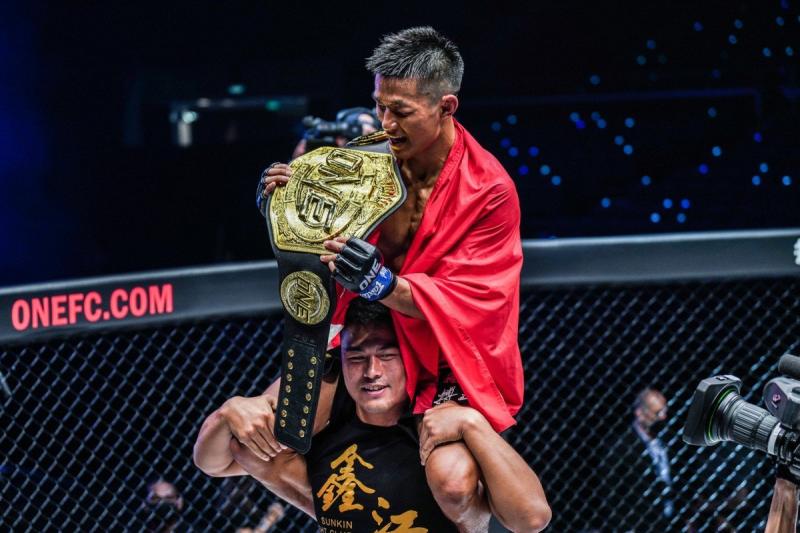