Thailand coach Mano Polking lifts the trophy as he celebrates with his players and staff after winning the Mitsubishi Electric Cup at Thammasat Stadium on Monday. (Reuters photo)

Thailand aim to become a force in Asia and claim their first-ever World Cup berth after retaining the Asean title on Monday night.

The War Elephants secured their second successive Asean crown after beating Vietnam 1-0 in the second leg of the AFF Mitsubishi Electric Cup final for a 3-2 aggregate win to cement their status as the leading side in Southeast Asian football.

A fierce 24th-minute drive from captain Theerathon Bunmathan was enough for the home team to win in a scrappy encounter at Thammasat Stadium in Rangsit, played under the watchful eye of Fifa president Gianni Infantino.

The victory gave Thailand their record-extending seventh AFF trophy and means they have successfully defended the title on three separate occasions.

Vietnam, with two titles, and Malaysia, who have lifted the trophy once, are the only other two champions of the biennial event.

Thailand coach Mano Polking admitted it was not a "beautiful" performance but praised the professionalism shown by his team.

"All credit to the players -- they did a fantastic job," the German-Brazilian coach said.

He added: "We wanted to remain as the No.1 team in Asean. Our next target is the Asian Cup [later this year]. We want to develop the team to be good enough to fight the likes of Japan, South Korea and Saudi Arabia. 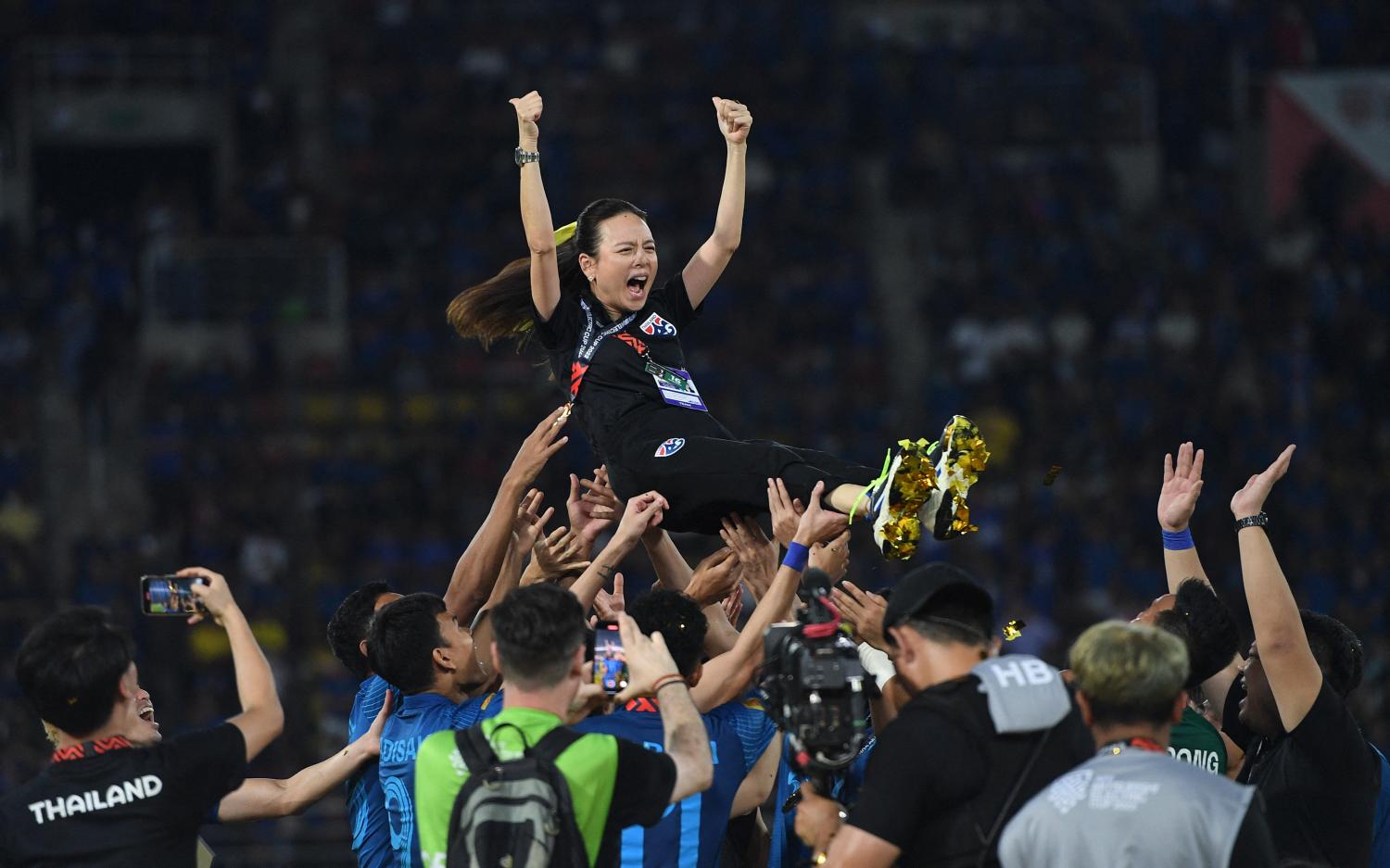 Thailand manager Nualphan Lamsam is thrown into the air by her players. (Reuters photo)

"Thailand will next participate in the West Asian Football Federation Championship [in the UAE in March]. It is a great opportunity for Thailand to play with strong teams with higher world rankings."

Polking and manager Nualphan Lamsam had helped Thailand regain the title in the previous edition in their first assignment in the positions.

"Fifteen years ago, we lost to Vietnam in the final," Thailand manager Nualphan said. "This time we were successful and met our target for our fans. We were under pressure because we only had seven players from the previous edition with 16 players who had not won the [AFF] title before.

"More importantly, defending a title is always more difficult than winning it. I'd like to thank the coaching staff, players and fans for their unity which helped us win our seventh title out of 14 tournaments."

Nualphan, a member of one of Thailand's richest families, will give the team a total of 20 million baht in bonus out of her own pocket.

Nualphan was previously manager of the Thai women's national side and helped the Chaba Kaew reach the Women's World Cup finals twice in 2015 and 2019.

With 8.5 slots on offer for Asia at the 2026 men's World Cup, which will be the first to have 48 teams, expanded from 32, Nualphan said the quota is attractive. 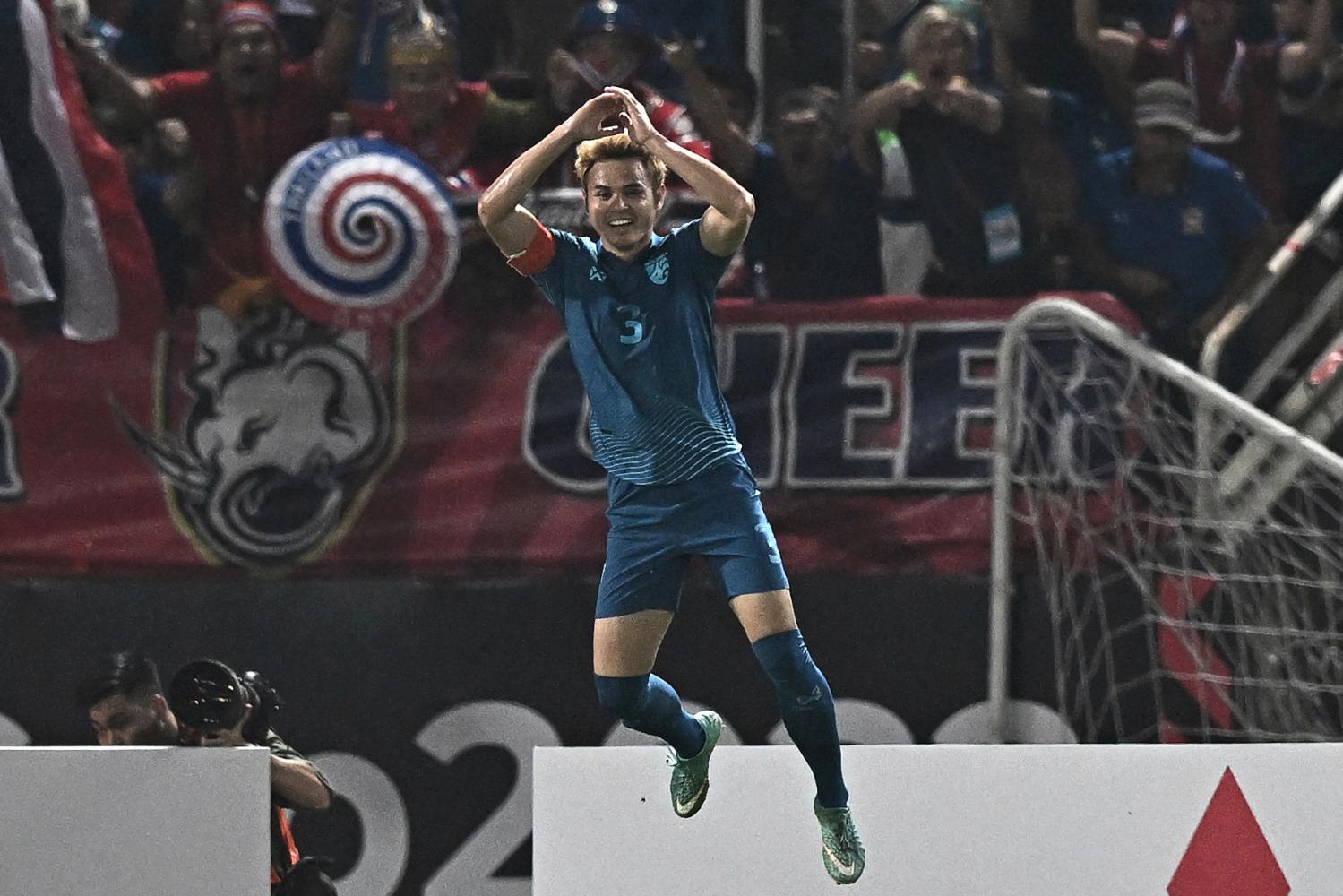 Theerathon was named the best player of the tournament.

Thailand's Teerasil Dangda, who missed both legs of the final due to injury, and Vietnam's Nguyen Tien Linh were joint top scorers with six goals.

It was Park Hang-Seo's last assignment as coach of Vietnam after he had announced his departure ahead of the tournament.

"I'd like to congratulate Mano and Thailand for winning the title. I wanted to win the trophy as a gift for the Vietnamese football fans but I could not do it. The Vietnamese players worked very hard and I hope the fans will keep on cheering them.

"I am no longer coach of Vietnam but I will be a fan of Vietnam forever," Park said.

Park also said he hadn't given much thought to his immediate future.