Around 15,000 runners fought driving rain and strong winds on Friday to race around a freezing Jerusalem for the Holy City's second-ever marathon. 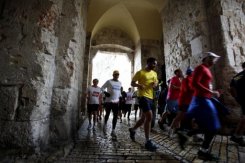 Runners take part in the second international Jerusalem Marathon in the Old City. Around 15,000 runners fought driving rain and strong winds on Friday to race around a freezing Jerusalem for the Holy City's second-ever marathon.

Hundreds of police and border police were deployed to provide security along the course, part of which ran through annexed Arab east Jerusalem, a spokeswoman said.

In addition, 4,000 Israeli soldiers also ran in a special race along the route.

But no amount of security could have protected the runners from the cold and wet weather.

As the marathon runners gathered by the starting line waiting for the 7:00 am start, a wave of freezing rain caused groans of complaint from the waiting crowd, some of whom were smart enough to bring bin bags for cover.

The weather was bitterly cold throughout, with driving rain, strong winds and hail stones pounding the runners as they fought their way up Jerusalem's notorious hills.

"I've done 12 New York marathons but nothing compares to this," said Jerry, a 65-year-old American runner. "People warned me how hard the hills were, and they absolutely are!"

Of them 1,500 people, representing more than 50 countries including Trinidad and Tobago, Indonesia and Turkey, arrived from abroad for the event.

Some were bare foot, a few were dressed up, and one Brazilian man in his 50s came with his squeaky rubber duck, which he said had travelled with him on races all around the world.

"I've run in marathons all around -- along the Great Wall of China, in Trinidad, in Dubai, but this was the hardest because of all the hills," he said, in a mixture of Portuguese and broken English, giving his name only as Neilson.

Neilson spent the whole time laughing and joking, squeaking his duck at children as he ran by, singing loudly in Portuguese.

"I really enjoyed myself, with all the people saying 'shalom' to me. But next time, you come run in Brazil. Is much warmer," he grinned.

Starting from the Knesset, Israel's parliament, the route took runners up and down several hills, through the walled Old City and areas of east Jerusalem, including the biblical Mount of Olives.

Israel captured east Jerusalem in the 1967 Six-Day War and later annexed it in a move never recognised by the rest of the world.

The Jewish state considers Jerusalem its eternal and indivisible capital, a claim not recognised by the international community. The Palestinians want east Jerusalem as the capital of their promised state.

"No training in the world could prepare you for the terrain of Jerusalem and the hills," said Noella Pio Kivlehan, a first-time marathon runner from Ireland who completed the race in just under six hours.

"There was really good camaraderie among those of us who were among the stragglers. It really helped me when things got difficult."

Chelsea into Champions League semis for first time since 2014