France's Groupama took the lead in leg five of the Volvo Ocean Race on Tuesday, as the feared "Roaring Forties" produced little more than a feeble breeze in the Southern Ocean. 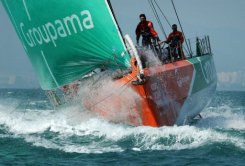 France's Groupama took the lead in leg five of the Volvo Ocean Race on Tuesday. The French yacht was 1.1 nautical miles ahead of Spain's Telefonica, which is still the overall leader in the nine-leg race.

Groupama was 1.1 nautical miles ahead of Spanish entry Telefonica -- still the overall leader in the nine-leg race -- with Puma of the United States just 1.5 nautical miles further back in a tightly bunched leading pack.

Sanya and Camper were also within striking distance of Groupama as the first five vessels in the six-yacht fleet enjoyed a reprieve from the battering they have endured since departing from Auckland on Sunday.

Abu Dhabi trails the rest of the fleet by more than 300 nautical miles, attempting to make up lost time after being forced to return to Auckland for repairs shortly after setting off when it smashed into a steep wave.

The break in the weather was an unexpected chance to recover for the crews, who were braced for more challenging conditions in the Roaring Forties, an area south of 40 degrees latitude long feared by mariners for its high winds.

"I feel like I've gone 12 rounds with Mike Tyson," Puma skipper Ken Read said. "Everybody in the fleet's body and mind is pretty shot right now."

Read said one crew member suffered a dislocated shoulder and another a wrenched back as they were tossed around in the heavy seas.

At one point, he was considering diverting to the Chatham islands, south of New Zealand, to drop off the injured men but they insisted the yacht should press on.

With the fleet unable to go further south because of the danger from icebergs, the yachts must wait for a high-pressure system to pass before winds will pick up and push them to Cape Horn, some 3,500 nautical miles east.

Telefonica navigator Andrew Cape said the leading group was so tightly packed that the race would be wide open when the weather system passes and the Roaring Forties finally lives up to its name.

"Anything could happen here, it's all on for young and old," he said.

The leg from Auckland to Itajai in Brazil is the longest and most difficult in the 39,000-nautical mile race, which will finish in Galway, Ireland, in July.