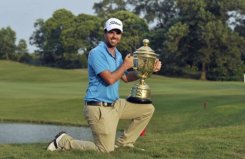 Nick Cullen of Australia celebrates his victory at the Enjoy Jakarta Indonesia Open -- the first event of this year's OneAsia schedule.

The left-hander carded a two-over-par 74 to hold off a brave challenge from David Smail, pipping the New Zealand player to victory by just one shot.

"This means the world to me," 27-year-old Cullen said afterwards in comments released by tournament organisers.

"I have been practicing hard and playing well but I didn't know what to expect when I came here.

"It is only my second time playing in Asia and it's very different compared with playing at home particularly with a different climate and food."

Cullen looked to be cruising to victory with five holes to play, leading the chasing pack by four shots.

However a triple bogey at the fourteenth and shots picked up elsewhere meant he was level with Smail, American David Oh and Japan's Yoshikazu Haku with two holes to play.

An impressive birdie at the seventeenth and a neat up and down on the final hole was enough to beat Smail, who shot a three-under-par 69, by one shot.

Cullen finished with a four-round aggregate of nine-under-par 279 and earned a cheque for $172,000.

Haku, Oh, and New Zealand's Michael Long finished tied for third, two shots off the pace. Long carded a 65, the lowest round of the week.

The next OneAsia event is the Volvo China Open at Binhai Lake Golf Club in Tianjin, to be played from April 19 to 22.