It might be exciting - but it's not Muay Thai
Sports

It might be exciting - but it's not Muay Thai

Those who have watched the rise of John Wayne Parr as the titan of Asian fight venues were amazed to learn that the great Australian martial artist and boxer is heading a promotion that will stage the first Muay Thai championships in the octagon cage.

The Caged Muay Thai Series - billed as the Boonchu Cup - will be held in Queensland, Australia, on June 23. 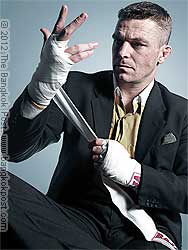 Not only will Thai stand-up rules be fought in the octagon but the combatants will be wearing mini-gloves weighing just four ounces.

Whilst I am a great admirer of JWP who came to Thailand as a teenager back in the 1990s, and lived in a Thai training camp alongside the "Deadly Kisser" legend Thai fighter Saengthien-noi Sor Rungroj, the prospect of having Muay Thai locked into a cage environment is tantamount to a cricketer chucking - not bowling - at the batsman.

Cage fighting and Muay Thai are as different as rugby and football.

And just as football has an offside rule for the beautiful game, Muay Thai has protective gloves that encourage and empower all the eight limbs to partake in the beautiful art of stand-up combat.

For sure Muay Thai practitioners wearing the lightest of gloves in a confined cage adds an excitement element for more knockouts, especially with the caged wall closing off any avenues of retreat.

But what about the centuries of Muay Thai heritage that have evolved from the battlefield to the honourable ring rules of Muay Thai?

Do the legions of Muay Thai practioners and fans in Thailand - and in countries all around the world - want to see their beloved sport become just another form of cage fighting?

While mixed martial arts (MMA) in the cage has fended off attacks that it's a blood sport where two people get into a cage and one person leaves the other one behind bleeding with broken bones, Muay Thai has established fighting rules where safety in the ring is paramount.

Unlike MMA that is open to interpretation and in many venues loose on regulation, Muay Thai has long established rules for the ring which were written in stone when the Thai sport first went international after World War II and adopted the boxing rules of three-minute rounds, the 10-point must scoring system, medical examinations before contests and, very importantly, standard gloves of eight and 10 ounces to give fighters protection from hard hands.

Wearing light-weight MMA gloves for caged-in contests gives an enormous advantage to the fighter with heavy hands. Four-ounce gloves take the lid right off the discipline and skills of boxing and Muay Thai, as defence is reduced by half with the small gloves.

If Muay Thai cage fighting becomes popular - and as a passionate lover of Muay Thai culture I hope it's short-lived - then the advantage will be with the heavy hitters and not the kickers and grapplers that dominate the Thai fighting art of today.

There is no doubt that JWP is a hard puncher and with his powerful counter-punching he'll be able to push the taller Thai fighters up against the cage where they won't be able to duck under the ropes and get out of danger.

Muay Thai in the cage will mean that the classic Thai fighters will be pinned against the cage and it will take them years to learn the techniques required to avoid a certain pummelling.

It's time for Muay Thai to assert its worldwide reputation of being the greatest stand-up fighting art on the planet.

If promoters want to do stand-up fighting in the cage then don't call it Muay Thai.

Muay Thai fans appreciate that their sport is the leading edge of stand-up combat and the Thai fighting style is so much more than a slugfest with heavy hitters wearing four ounce gloves.

Chances are that martial artists fighting a punch-fest in the octagon would be knocked out by hard hands. But what would that prove? That hard knuckles can do more damage than martial arts skills? I doubt it.

What stand-up cage fighting will bring on is a lot more blood stoppages and more facial damage.

That isn't the fighting spirit of Muay Thai.

JWP says he's a big fan of the Untimate Fighting Championship (UFC), and admires how tough the fighters are.

"So many people I talk to over the last 10 years all say the same 'love the cage, hate when they go to the ground'," he said.

The JWP simple solution is to put Muay Thai in cage with the fighters wearing light gloves.

But history shows that when Muay Thai went into the cage through Europe in the late 1990s it didn't take off.

It should also be remembered that Muay Thai has outlasted kickboxing and K1 and will be around long after the stand-up cage wars come and go.