All weekend football in Italy was called off on Saturday following the death of Livorno midfielder Piermario Morosini, a player whose own private life had been plagued by a series of tragedies. 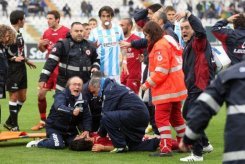 Medics treat Livorno midfielder Piermario Morosini (on ground) during a second league match against Pescara. The 31-year-old player has died after he collapsed suddenly on the pitch during the game.

The 25-year-old, on loan from Serie A side Udinese, collapsed on the pitch during a second division game at Pescara and was later pronounced dead in hospital.

It continued a tragic family history that saw Morosini's parents die while he was a teenager, after which his disabled brother also committed suicide.

He is survived by an older sister, who is handicapped.

The Italian Football Federation general manager Antonello Valentini responded to Saturday's tragedy by suspending all remaining weekend football, starting with the Serie A match between AC Milan and Genoa.

The match had been due to kick-off at 6:00 pm local time (1600 GMT). Fans already at the San Siro stadium responded to that announcement largely with applause, although some jeered.

Morosini suffered a heart attack during the first half of the match. He collapsed suddenly and was treated on the pitch before being taken away by ambulance to the Civile Santo Spirito hospital in Pescara.

But the former Italy under-21 international was later pronounced dead.

"I darted onto the pitch because I understood straight away that it was a serious situation," he said.

"I didn't even wait for the referee's permission. I gave him heart-massage straight away and for a moment I felt he was coming back but there was nothing we could do."

There was a delay as the ambulance was initially prevented from entering the stadium due to a police car blocking an exit.

Pescara goalkeeper Luca Anania explained: "There were moments of great confusion and I tried to understand what was happening, also with regard to the delay of the emergency services.

"They said the ambulance couldn't come onto the pitch because the entrance was blocked by another car. Some of my team-mates carried the stretcher to the ambulance."

Local authorities opened an investigation into the incident but a heart specialist said the delay made no difference.

"A minute more or less in the ambulance would not have done anything," cardiologist Dr Paloscia told ANSA.

"His heart had stopped and never started beating again. We tried to reanimate him for an hour and a half but it was all to no avail."

Italian media were alerted to Morosini's death initially by an "explosion of shouts and tears" from his team-mates who had come to the hospital, ANSA said.

Police started to usher the press away but the official confirmation followed shortly afterwards.

FIFA president Sepp Blatter was amongst those to pay tribute to Morosini.

"The tragedy that has affected everyone that loved him has brought great pain to everyone who loves football," he said on his Twitter page.

Muamba's collapse on March 17 raised fears that he would become another entry in the grim list of professional footballers who have died playing the game, the most high-profile being Marc-Vivien Foe.

The 28-year-old Cameroon midfielder, who played for West Ham United, Manchester City and Lyon, died after collapsing during a Confederations Cup semi-final against Colombia in Lyon in June 2003.

But Muamba -- whose heart stopped for 78 minutes as medics battled to keep him alive both at the stadium and then in hospital -- defied the odds and has since made incredible progress, boosting hopes that he will make a full recovery.