Bahrain's controversial Grand Prix race went off without incident on Sunday after a week of angry protests away from the F1 desert circuit that put the non-sporting focus on reform demands in the Gulf state. 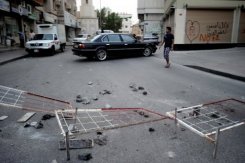 Red Bull Racing's German driver Sebastian Vettel leads (R) after the start at the Bahrain international circuit in Manama during the Bahrain Formula One Grand Prix. Bahrain's controversial Grand Prix race went off without incident on Sunday after a week of angry protests away from the F1 desert circuit that put the non-sporting focus on reform demands in the Gulf state.

King Hamad was among 10,500 spectators on the main grandstand and a smaller audience watched from other platforms as double world champion 24-year-old Sebastian Vettel of Germany led from start to finish.

The country's Shiite opposition had called for the race, held behind layers of security at a time of soaring tensions in the Sunni-ruled kingdom with a Shiite majority, to be called off.

The most radical elements of the opposition, the February 14 Youth Movement, used text messaging and social networks to urge protesters to hold fresh demonstrations to coincide with the race.

Right after the race, protesters burnt tyres on the main road linking the capital to the Sakhir race track, witnesses said, as security forces stopped dozens of others from marching towards the now demolished Pearl Square in central Manama.

Earlier, activists used burning tyres and garbage to try to block roads to the circuit. An AFP photographer said the route, though jam-packed with traffic, was later cleared.

Bahrain's interior ministry said "all roads and routes leading to the (Sakhir) circuit were safe and open."

Police were out in strength patrolling Manama and roads to the track. Helicopters flew low over the capital and armoured vehicles were deployed across the city, witnesses said.

At the racetrack, spectators each paid 155 Bahraini dinars (310 euros) for the final day or 180 dinars for the whole three-day event. Men in Arab dishdashas stood along Westerners and women in shorts milling around souvenir stands.

Bahrain insists the unrest is isolated, but tensions mounted as protesters intensified their movement, taking advantage of the world media spotlight on the showcase event.

The Grand Prix in Bahrain was cancelled last year in the wake of pro-democracy protests centred on Pearl Square and subsequent crackdown in which a government commission said 35 people were killed.

In a statement before the race, King Hamad pledged he was committed to reform.

"I also want to make clear my personal commitment to reform and reconciliation in our great country. The door is always open for sincere dialogue amongst all our people," he said.

His announcement came as police fired tear gas and stun grenades at Shiite protesters who responded by hurling rocks and fire bombs while chanting "Down with Hamad," witnesses told AFP.

In protests that lasted through the night and into early Sunday, demonstrators also called for the release of prominent Shiite activist Abdulhadi al-Khawaja, on hunger strike since early February.

State news agency BNA reported that Khawaja was in "good" health and that the Danish ambassador had visited him in hospital on Sunday, as Khawaja is a dual citizen of Bahrain and Denmark.

The Youth Society for Human Rights said Zeinab would face interrogation by authorities for taking part in demonstrations, but it was not clear if she was still being detained on Sunday.

Another activist, Mohammed Hasan, 26, was beaten by police with the barrel of a gun, another rights group said.

Rights watchdogs have repeatedly called for Khawaja's release and denounced the government's reforms as mostly hollow. They also warned that the political stalemate could set Bahrain on a path to more violent confrontation.

In some Shiite villages, including Malkiya, Karzakan, Sadad and Damistan, protesters late on Saturday carried banners that read "No to the formula of blood," a key campaign slogan of the protest movement.

On Saturday a protester was found dead in the Shiite village of Shakhura.

The opposition Al-Wefaq movement said security forces on Friday night "attacked peaceful protesters, brutally beating some of them with various tools and weapons" in Shakhura.

The interior ministry said it was probing the death of Salah Abbas Habib, 36.

The violence has centred mostly in and around Manama's neighbouring Shiite villages but on Wednesday, four mechanics from the Force India F1 team were caught in a traffic jam as a petrol bomb exploded nearby.