The Por Pramuk camp sued its boxer Buakaw Por Pramuk and four other parties yesterday for his participation in a Thai Fight event without approval from his lawful handlers. 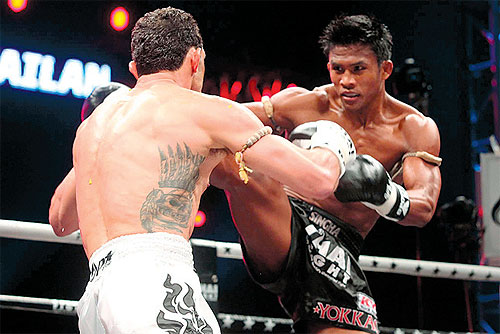 Camp owner Theerapat Rojanatan is seeking 100 million baht in damage from the five parties. He also asks the court to issue an injunction to prohibit Buakaw from taking part in the Thai Fight and other events.

The court set July 16 for an initial hearing.

Lawyer Wiwat Sangsuriyachat, who represents the Por Pramuk camp, said Buakaw should talk to camp bosses to settle the conflict out of court.

The Muay Thai superstar has left the Por Pramuk camp since last month and vowed not to fight for the camp again.

He initially claimed the camp did not look after him properly but later also said the camp owed him millions of baht from prize money and income from other sources.

Buakaw fought in the Thai Fight event in Pattaya on April 17 without the green light from the Por Pramuk camp which still has contract to manage the Surin boxer.

After the controversial bout, Thai Fight organisers admitted that they asked him to join the Pattaya event to "limit damage" from his absence.

The fighter took part in the event without weighing in. The SAT has said Buakaw violated the Boxing Act but it was named in the suit because, according to the Por Pramuk camp, one of its senior officials was at the event but did not try to stop the fight.

Buakaw said in the ring after the fight that he participated in the event for the country and his fans. He later admitted that his appearance was unlawful but he wanted society to know what was going on.

Earlier yesterday, Attapong Am-anan, a promoter of the Pattaya event, told the Senate committee on sports that Buakaw signed a contract in October 2010 to fight in the April 17 bout with Por Pramuk camp boss Theerapat also signing the paper as a witness.

He admitted he knew that Buakaw's participation in the Pattaya fight violated the law but he had to ask him to fight because the organisers could face legal action from the sponsors.

SAT deputy governor Sakol Wannapong said he had asked all concerned parties to talk on April 30.

Committee chairwoman Naruemol Siriwat said she would ask Buakaw and representatives from the Por Pramuk camp to attend a meeting on May 10.