When it came to being wild and crazy, nobody could match Steve Martin and Dan Akroyd playing those plaid-n-stripes wearing Czech brothers on Saturday Night Live. 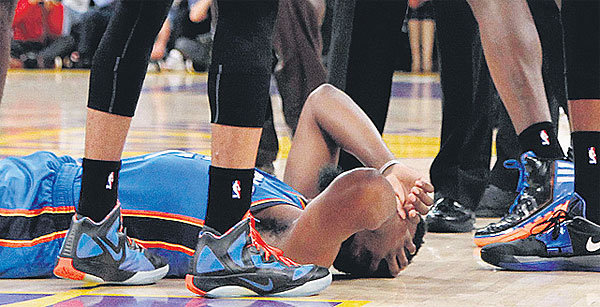 That is, until the opening round of the NBA and NHL play-offs where we saw a whole bunch of not-so-comical nutty guys in action.

An unprecedented spate of over-the-line player behaviour had league bosses scrambling as they sought to mete out appropriate punishment.

Play-off intensity is one thing, postseason lunacy quite another. This years' participants seemed to see the start of the "real" season as licence to commit mayhem without consequence.

They were wrong and they and their teams ended up paying a heavy price in lost time and/or money.

In the NBA things actually got started just before the play-offs tipped off but still impacted round one.

That's when the Los Angeles Lakers' Metta World Peace, the Wacko Formerly Known as Ron Artest, delivered the elbow felt 'round the world to the jawline of Oklahoma City's James Harden, dropping him like a sack of potatoes.

You'll recall World Peace was previously suspended for most of a season for the "Malice at the Palace" incident in Detroit. That's when Artest and some mates went into the stands and attacked Piston fans.

Despite his NBA rap sheet, World Peace was given a mere six-game suspension for his vicious blow and missed most of LA's series with Denver.

Had the elbow been delivered a few inches higher, it could have been more devastating than the punch delivered by Kermit Washington to the face of Rudy Tomjanovich many years ago _ long the benchmark for horrific damage done in an on-court skirmish.

Thus, without fear of severe punishment, World Peace will probably continue to act the idiot.

Then there was the Boston Celtics' Rajon Rondo chest-bumping a referee after a call he didn't like.

Making contact with an official usually brings a multi-game suspension in pro sports but Rondo was benched for only game two of the Celtics-Atlanta series.

At least NBA commissioner David Stern refused to buy Rondo's "tripped into the ref" defence and didn't let him off with just a chump change-type fine (for NBA multi-millionaries, anyway).

Over in the NHL, the large amount of dangerous activity in the opening round boggled the mind. When the undue violence passed "play-off hockey" to the point it bordered on "Slap Shot" absurdity, the league finally had to step in and do something.

He suspended serial cheap shot artist Raffi Torres of Phoenix a whopping 25 games for his near-decapitation of Chicago's Marian Hossa that necessiated Hossa' removal by stretcher.

This imediately stopped all the obvious over-the-line activity. There were still a few more one-game suspensions handed out but they were for hits that may or may not have been of the overboard variety.

Oh, and let's not forget that pair of swinging Ruskies from the Nashville Predators who stayed out past team curfew and were suspended by their coach. (No word on whether they were carousing with American women with large breasts.)

It cost the punctuality-challenged pair some pocket change and games missed while earning them scapegot status for the Preds series loss to the Phoenix Coyotes.

Both the knucklehead behaviour and excessive violence have thankfully abated with the arrival of the second round.

The punitive action of league and team honchos has the players ditching their wild and crazy ways, if not mismatched outfits.