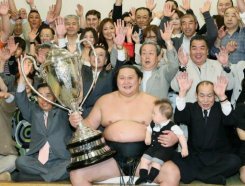 Mongolian-born sumo wrestler Kyokutenho holds the Emperor's Cup as he celebrates with his supporters after his victory in a play-off against Tochiozan of Japan on the final day of the Summer Grand Sumo tournament in Tokyo. The Mongolian-born 37-year-old has become the oldest wrestler in modern times to win his first career sumo title.

The 37-year-old slapped down Tochiozan, 12 years his junior, in the play-off for the Emperor's Cup after they stood level with 12 wins and three losses at the end of the regular 15-day tournament.

"It's an unbelievable feeling," Kyokutenho, real name Nyamjavyn Tsevegnyam, told a cheering crowd at Tokyo's Kokugikan Hall after lifting the cup in an award ceremony. "It was really heavy."

Before him, Toyokuni was the oldest wrestler to win his first career title since sumo was first organised by a national association in the mid-1920s. Toyokuni achieved the feat at the age of 35 in 1929.

Kyokutenho arrived in Japan in 1992 with the first group of Mongolians to join Japan's traditional sport. He obtained Japanese nationality in 2005.

Sumo has become increasingly dominated by non-Japanese with Kyokutenho the 10th foreign-born wrestler and the fourth Mongolian to win a tournament.