Buakaw calls it quits as dispute rages on
Sports

Buakaw calls it quits as dispute rages on

Buakaw Por Pramuk announced his retirement from Muay Thai yesterday after talks aimed at solving a financial dispute with the Por Pramuk boxing camp broke down. 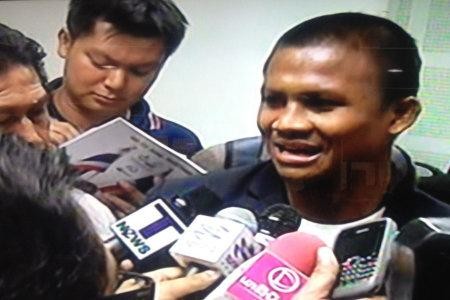 Muay Thai superstar Buakaw "Por Pramuk" Banchamek tells reporters of his decision to retire. The world famous Thai Fight champion said he could not agree on a new contract with his boxing camp.

The saga seemed to have reached a conclusion on May 22 when both parties made a deal that would allow the former K1 champion a bigger share of his fight fees as well as other income.

Under the agreement, Buakaw would receive 60 percent of fight fees and prize money and get 75 percent from other sources such as TV appearances and product endorsements.

But at yesterday's meeting to finalise the deal at the Sports Authority of Thailand (SAT) headquarters, Buakaw demanded full control of his commercial rights and 100 percent of any earnings.

Por Pramuk camp owner Pramuk Rojanatan refused to yield to his demands and as the discussions grew increasingly heated, the fighter surprised everyone by announcing his retirement.

"I want to announce that I will not fight anymore," said the 30-year-old Muay Thai superstar, who reportedly received 1.2 million baht per bout.

"I am sorry to say that and I made this decision by myself."

Buakaw, whose real name is Sombat Banchamek, added that from now on he would focus on training young people at his Banchamek camp in his native province of Surin.

SAT deputy governor Sakol Wannapong said he felt sorry that both sides had failed to reach an agreement.

Buakaw joined the Por Pramuk camp when he was nine but left in March after becoming frustrated with what he believed was his unfair treatment.

He then fought in a Thai Fight event in Pattaya last month without permission, a move that led to his camp suing both the boxer and the Thai Fight organisers. Buakaw Por Pramuk, left, offers his apologies to Pramuk Rojanatan as both sides met to sort out their differences on May 22.