The Poland-Greece match opening Euro 2012 on Friday match threatens to be overshadowed by fresh racism fears, despite hopes of a switch in focus to events on the pitch after a turbulent buildup. 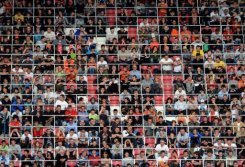 Racist chanting could be heard at the Netherlands' training session (above) at Reymana Stadium in Krakow on Wednesday, Dutch captain Mark van Bommel says.

Netherlands captain Mark van Bommel claimed in an interview published in De Telegraaf newspaper that the Oranje were forced to train away from the 25,000 fans who had turned up to watch them in the southern city of Krakow on Wednesday.

"We all heard the monkey chants," he was quoted as saying. "We can't accept that. We reacted well and the situation was sorted.

"During the tournament, if any one of us is confronted with such a thing, we'll immediately go to the referee to ask him to intervene," added van Bommel, who will line-up alongside his team-mates against Denmark on Saturday in Kharkiv, Ukraine.

UEFA said on Friday that it was now aware of racist incidents, although it had not received any formal complaint from the Dutch football federation.

"Should such behaviour happen at further training sessions, UEFA would evaluate the operational measures to be taken to protect the players," it said in a statement, without elaborating.

Van Bommel's comments come despite a senior UEFA official previously denying that there had been any racist chants and an angry response to a BBC programme last month which claimed that far-right gangs were rife in Polish and Ukrainian football.

The documentary showed footage of some supporters making Nazi salutes and monkey chants at black players, as well as anti-Semitism and a violent assault on a group of Asian students.

Poland, Ukraine and UEFA president Michel Platini have all tried to play down fears of racist incidents, which prompted the families of two black England players to say they would not be travelling to watch the tournament.

"It's easy to point the finger at Ukraine and Poland for racism but all countries are faced with the same problem," Platini told reporters in Warsaw on Wednesday. "We've done a lot of things but it's not a football problem, it's a social problem."

The fresh claims risk dampening the build-up to the showpiece opener of the 16-team tournament at the newly-built National Stadium in Warsaw, the first of 31 games in eight venues in the two eastern European nations.

The match kicks off at 1600 GMT and is followed by the second in Group A, where Russia's Prime minister Dmitry Medvedev was due to be in the stands in the western city of Wroclaw to watch Dick Advocaat's side take on the Czech Republic at 1845 GMT.

Germany on Friday flew to Lviv, western Ukraine, for their match on Saturday with Portugal, with captain Philipp Lahm insisting the team must prove they have what it takes to win a major tournament.

"The tension is building slowly, we have been working for two years for this moment. It's time to get going. We have a great squad, we just need to show what we can do," he said.

France's highly-rated midfielder Yann M'Vila was meanwhile an injury doubt for their opening Group D match against England in Donetsk, Ukraine, on Monday.

Roy Hodgson's men continued their preparations with a low-key public training session in front of 2,000-3,000 locals in Krakow.

Euro 2012 is the first time that European football's most prestigious international tournament has been held behind the former Iron Curtain and Platini insists it will be "not far off perfection" by the time the first ball is kicked.

But issues such as sky-high accommodation prices and unfinished infrastructure projects to racism and human rights have weighed heavily over the preparations.