France through but only after Swedish lesson
Sports

France through but only after Swedish lesson

France qualified for the knockout stages of a major finals for the first time in six years despite losing their final Euro 2012 Group D match 2-0 to already eliminated Sweden. 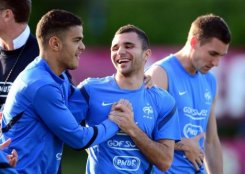 Swedish forward Zlatan Ibrahimovic (R) celebrates after scoring a goal during their Euro 2012 match against France on June 19. France qualified for the knockout stages of a major finals for the first time in six years despite losing their final Euro 2012 Group D match 2-0 to already eliminated Sweden.

A brilliant bicycle kick by Sweden's inspirational captain Zlatan Ibrahimovic in the 54th minute gave them the lead with the outstanding Sebastian Larsson adding a second in the final minute of normal time.

It handed the Swedes not only their first points of the group stage but also their first win over France in almost 43 years dating back to October 1969.

The French, who also saw their 23-match unbeaten run ended, progress in second place in the group after England beat co-hosts Ukraine 1-0 in the other game to finish top.

France - who last reached the knockout stages of a major finals in the 2006 World Cup - will play champions Spain in the last eight.

France coach Laurent Blanc was seething at the performance.

"Sweden played this match with its heart. Physically, they were better prepared and they had a player in the team who made the difference, which makes a hell of a difference.

"We are really disappointed by this result but we were in trouble throughout the match. When you lose a match, it is because you have not got the right team out there.

"Therefore, if I was to start it all over, we would not start with the same team."

France defensive midfielder Yann M'Vila said he and the rest of the squad had to turn up in a different frame of mind for the Spanish game.

"We came upon a team that was far stronger than us," admitted M'Vila.

"We are going to play Spain, the world and defending champions.

"It is up to us to show another side to our game and to prove that we can go far in this competition."

Swedish coach Erik Hamren said his team had improved across the tournament even if they had both managed to reach the last eight - though he recognised that France had had plenty of chances.

"I am proud of my players even if there is a bit of pain and it hurts. There is sadness after this game," Hamren admitted.

Ibrahimovic dedicated his man of the match award to his teammates and told reporters: "We have a good team but on a personal and individual level we have room for improvement. Today we wanted to give our fans a present - in this atmosphere we felt as if we were playing at home."

The Swedes should have gone ahead in the eighth minute as Ola Toivonen - who had replaced the injured Johan Elmander up front - was played onside and with only Hugo Lloris to beat. However, although he rounded the goalkeeper he found the angle too tight and his shot hit the post.

The French pressed from the start of the second-half with Karim Benzema finding some space and curling the ball just past the far post.

However, instead of sparking the French into some urgency it prompted the Swedes into their best period of play with Lloris pulling off one fine save in the 53rd minute.

A minute later he was unable to do anything about Ibrahimovic's stunning bicycle kick from Larsson's superb cross -- Ibrahimovic in typical celebratory style standing stock still and raising his hands pointing a finger of each hand at the sky.

France were wilting in the heat of the night and would have been 2-0 down minutes later but Olof Mellberg's header was tipped over the bar in extremis by Lloris.

Another of the Swedish veterans Christian Wilhelmsson - like Mellberg expected to retire from international football after this match - then went close himself but his shot too was turned away for a corner.

The French were defending with increasing desperation and it was no surprise that central defender Philippe Mexes picked up a booking for an overly physical challenge that rules him out of the quarter-final.

The Swedes pace slowed, though, and France began to have the lions share of possession which almost bore fruit when M'Vila - who had earned his first start of the tournament having recovered from an ankle injury - switched neatly from his left to right foot and fired a fierce shot just wide of the target.

Substitute Oliver Giroud should have done better from a late corner as he rose unmarked but his header went over the bar - and instead it was to be the Swedes who deservedly wrapped up victory through Larsson.