India's powerful cricket board has maintained its opposition to mandatory video technology despite backing for the system from the sport's world chiefs meeting in Kuala Lumpur. 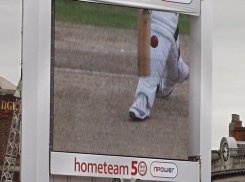 Indian cricketers look at a giant screen as they wait for a review decision against Sri Lankan batsman Thilan Samaraweera at the ICC Cricket World Cup final at Wankhede Stadium, Mumbai, on April 2, 2011. India's powerful cricket board has maintained its opposition to mandatory video technology despite backing for the system from the sport's world chiefs meeting in Kuala Lumpur.

Indian officials said their stance on the Decision Review System (DRS) was "unchanged" despite a recommendation for the technology to be compulsory in all Tests and one-day internationals, costs allowing.

"The BCCI continues to believe that the system is not foolproof," the Board of Control for Cricket in India said in a statement released on Monday.

"The board also sticks to its view that the decision on whether or not to use the DRS for a particular series should be left to the boards involved in that series."

The comments set the stage for more controversy over DRS, which uses ball-tracking and thermal imaging to verify umpires' decisions. It was made optional last year, rather than compulsory, at India's insistence.

India, which accounts for the lion's share of global cricket revenues, has been suspicious of DRS since making a number of unsuccessful referrals during the 2008 Test series with Sri Lanka, when the technology was on trial.

But most other cricketing nations including England and Australia support the system.

At the weekend, Pakistan coach Dav Whatmore was incensed when DRS was not used during the first Test against Sri Lanka, reportedly for cost reasons. Pakistan suffered from a number of umpiring errors in the match.

The recommendation for mandatory DRS, made by the chief executives' committee of the International Cricket Council on Monday, will now be considered by the body's board at a meeting on Tuesday and Wednesday.

Morales says will return to Bolivia after ally's election victory