Mirza's fury at being used as Olympic tennis 'bait'
Sports

Mirza's fury at being used as Olympic tennis 'bait'

India's top player Sania Mirza has lashed out at the country's tennis chiefs, saying she was humiliated at being used as "bait" in an Olympic selection row to pacify a disgruntled Leander Paes. 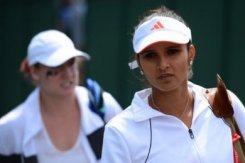 India's Sania Mirza (shown right at the Wimbledon championships on June 25) has lashed out at the country's tennis chiefs, saying she was humiliated at being used as "bait" in an Olympic selection row to pacify a disgruntled Leander Paes. Mirza accused chiefs of "male chauvinism".

The All India Tennis Association (AITA) last week announced two men's doubles pairs for the London Olympics with Paes, ranked seventh in the world as a doubles player, paired with 207th-ranked Vishnu Vardhan in one team.

Rohan Bopanna (ranked 13) and Mahesh Bhupathi (15) formed the other combination after they said they would not play with Paes for a range of personal and professional reasons.

Local media reported Paes made being paired with Mirza in the mixed doubles event at the Olympics a pre-condition for playing with a lower-ranked player in the men's doubles.

"As an Indian woman belonging to the 21st century, what I find disillusioning is the humiliating manner in which I was put up as a bait to try and pacify one of the disgruntled stalwarts of Indian tennis," Mirza said in a statement.

"The manner and timing of the announcement reeks of male chauvinism," Mirza said.

She particularly complained about being "offered in compensation to partner one of the feuding champions purely in order to lure him into accepting to play with a men's player he does not wish to play with!

"This kind of blatant humiliation of Indian womanhood needs to be condemned even if it comes from the highest controlling body of tennis in our country," she said.

Paes and Bhupathi formed a long-standing and highly successful team for years, winning Grand Slam doubles titles at the French Open in 1999 and 2001, and Wimbledon in 1999.

The duo, who have represented India in the doubles at four Olympics, broke up as a full-time pair in 2002, but continued to team up for India in the Davis Cup and multi-sports events such as the Olympics.

Mirza, currently playing at the Wimbledon championships, will partner Paes at the Olympics despite winning two Grand Slam titles with Bhupathi -- the Australian Open in 2009 and French Open in 2012.

The Olympic selection argument has drawn in senior government officials, with both Foreign Minister S.M. Krishna and Sports Minister Ajay Maken calling for an end to the damaging dispute.

Speaking to AFP in London on Tuesday, Mirza said the very public row had soured preparations for the Games in London.

"It's not a nice situation. Obviously it wasn't the ideal situation you want before an Olympics," she said.

"It got really mucky and dirty with everyone saying all kinds of things."

In a statement issued in New Delhi on Wednesday, the AITA insisted that it's final selection for the Olympics pairings had been based "purely on merit" and appealed to players to stop using the media to air their grievances.

"AITA believes that Leander and Sania together are capable of producing fantastic results in the Olympics," the statement said.

"We earnestly appeal to all the players to unite together, shed off all their differences, stop going public and join hands together in the best national interest of winning medals for the country."