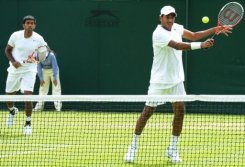 Bhupathi, who said the situation could not have got any uglier, denied he was manipulating other players against his former doubles partner Leander Paes, as Mirza said she was being humiliated by being used as "bait" to pacify Paes.

Bhupathi and his current partner Rohan Bopanna both said they would not play with the higher-ranked Paes at the London 2012 Games for a range of personal and professional reasons.

Mirza, who earlier this month won the French Open mixed doubles with Bhupathi, then lashed out at the All India Tennis Association (AITA) in a letter about her treatment.

Indian media reported Paes made being paired with Mirza in the Olympic mixed a pre-condition for playing with a lower-ranked player in the men's.

"Things couldn't have got uglier for us in Indian tennis the last week," Bhupathi said after his first round win at Wimbledon with Bopanna.

"It's an unbelievable situation they have put her in and I obviously sympathise with Sania. I feel for her."

Bhupathi said he wanted to play mixed doubles at the Olympics with Mirza.

"I'm committed to her. We're playing here, and if we get a chance to, we will play the Olympics," he said.

"In her letter she clearly stated that we have won two Grand Slam titles, one as close as two weeks ago. They have to worry about if they want to win a medal for the country -- or, as she said, keep one player happy."

Bhupathi recently said he could not trust Paes, but denied being a troublemaker in the row.

"It is an underlying problem which a lot of people have to look into and figure out," he said.

"Everyone seems to think that I'm the one manipulating and pulling the strings for all these extremely individual and successful tennis players like Rohan and Sania. It's not true.

"Maybe after the Olympics there is something to be done. We're just glad this whole thing is behind us."

The 38-year-old said AITA trying to break up his partnership with Bopanna to get one of them to play with Paes was "something that had no logic, so we had to take a very hard stance".

"Everyone has their opinion. Everyone probably stands by it," he said.

"He, definitely being the number one player in India, deserves to go, but he needs to deserve to go with someone who wants to play with him."

"What's done is done. It was unfortunate and it was ugly, but we just want to focus on Wimbledon now. We're not just dwelling on the past."

Bopanna stressed that he was a man who put his country first, recalling that he broke up his successful partnership with Pakistan's Aisam-ul-Haq Qureshi to team up with Bhupathi this year in preparation for the Olympics.

"I put country very much ahead of my personal choices, and I think that should be considered," the 32-year-old said.

The seventh-seeded pairing beat Marcel Felder of Uruguay and Tunisia's Malek Jaziri 6-0, 7-6 (7/1), 6-2 on Wednesday to book a second round spot.

Bopanna is looking forward to returning to the Wimbledon lawns for the 2012 Games, which open in a month's time.

"There's nothing bigger than representing your country at the Olympics," he said.

"For me, it's going to be the first time. Grass being my favourite surface, coming back here after Wimbledon to play at the Olympics, I'm really looking forward to it."

Bhupathi suggested the Olympic spat had the makings of a lucrative Bollywood movie plot.

"I'll sell the rights for a lot of money," he joked.