Americans Cristie Kerr, Brittany Lincicome and LPGA rookie Lizette Salas each fired a three-under par 69 to share the lead after first round of the US Women's Open. 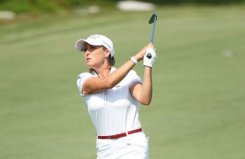 Cristie Kerr hits her second shot on the par 4 14th hole during round one of the 2012 US Women's Open at Blackwolf Run, on July 5, in Kohler, Wisconsin. Kerr, Brittany Lincicome and LPGA rookie Lizette Salas each fired a three-under par 69 to share the lead after the first round.

In sweltering heat with no relief from wind at Blackwolf Run, the US trio seized the top spot at the year's third major women's championship by handling the conditions, their rivals and the most difficult layout they face all year.

Salas opened and closed her round strongly with a five-foot birdie at the 18th allowing her to join the top group, having earlier scored birdies at the par-5 seventh and par-4 15th. Her lone bogey came at the par-4 11th.

"We just figured any putt on the green is a birdie putt," Salas said. "Down the stretch we had some good birdie opportunities and I took advantage of that last one."

Kerr, ranked eighth in the world, began on the back nine and birdied the 11th, par-3 13th and par-5 16th then finished with 11 pars to claim her place at the top of the leaderboard.

Kerr's 14 LPGA titles include a victory at the 2007 US Women's Open while Salas has yet to claim a pro victory.

Lincicome made bogeys at the first and fifth but each time answered with a birdie on the following hole. She added birdies at the par-5 seventh and 10th holes and another at the par-3 17th to share a share of the lead.

World No. 1 Yani Tseng of Taiwan, trying to complete a women's golf career Grand Slam with a victory this week, opened with a 74 to stand five adrift.

Tseng began with a birdie but stumbled with a double bogey 6 at the fourth. She answered with a birdie on the next hole but triple-bogeyed the par-4 11th and sandwiched a bogey at the par-3 13th between birdies and parred the last four holes.

The 23-year-old LPGA star could become the youngest golfer to complete a career Slam, doing so one year younger than Tiger Woods.

Tseng owns five major titles, the most recent won at age 22 at the 2011 Women's British Open.

Australian star Karrie Webb is the youngest woman to complete the career Grand Slam, having done so at age 26 by capturing the 2001 LPGA Championship.

Tseng, whose best US Women's Open finish was a share of 10th in 2010 at Oakmont, won three titles in her first eight events of the year.

Thai AirAsia will put 75% of staff on furlough for four months, starting February, to help the airline stay afloat in the wake of re-emerging Covid-19 outbreak.

Two private hospitals have ordered millions of doses of coronavirus vaccines ahead of regulatory approval, adding to government orders of vaccines as Thailand tackles a second wave of the virus.

Artificial intelligence has become an inescapable part of modern life, and the Japanese government is hoping it can help local municipalities use the technology in their efforts to play cupid for lovelorn residents.