From broken neck to breaking records for Vogel
Sports

From broken neck to breaking records for Vogel

Without a cycling helmet, she would probably have been killed. Three years after surviving an horrific accident, German cyclist Kristina Vogel will arrive at the Olympics as the world team sprint champion and record holder. 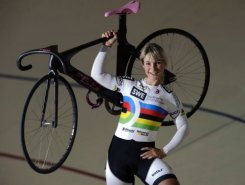 German track cyclist Kristina Vogel, pictured in May 2012, poses for a portrait at a cycling track in Erfurt, eastern Germany. Three years after surviving an horrific accident, Vogel will arrive at the London Olympic Games 2012 as the world team sprint champion and record holder.

Her Melbourne world championship triumph was the 21-year-old's first taste of glory on the world stage and she will be battling alongside Britain's Victoria Pendleton and Australia's Anna Meares for Olympic sprint gold medal in London.

It is all a far cry from April 20, 2009, when she collided with a minibus while riding her bike near her home in Erfurt.

"A minibus took the right of way and I flew through the windscreen," Vogel, who was 18 at the time, told AFP.

"I am lucky I am not quadriplegic since I broke the fifth vertebrate in my neck on both sides.

"I also broke my cheekbone, bones in my hand, sustained a lot of deep cuts, especially in the face and lost six teeth in my lower jaw. I was in an artificial coma for two days, spent four weeks in hospital and was strapped to the bed for two and a half of them when I could only lie flat.

"It took three months of rehab and I was off my bike for four months in total.

"But it wasn't hard for me to get back in the saddle. I couldn't talk at the time, so I wrote on a piece of paper that my goal was to race at the world championships the following March.

"That was my motivation and challenge."

Back then, the plucky teenager fulfilled the promise to herself and finished fifth in the individual sprint at the 2010 World Championships in Copenhagen and along with partner Miriam Welte came sixth in the team sprint.

Vogel won the bronze in the keirin at the 2012 championships in Melbourne in April, but it was alongside Welte in the team sprint where the pair shone.

Having set a new world record in qualifying, they lowered their own mark in the final to claim gold in 32.549secs, beating home favourites Kaarle McCulloch and Anna Meares of Australia in the process.

"The title was a surprise for us," admitted Vogel.

"It has given us a lot of confidence, the world championships have shown Miriam and I that we are up there and it is a good base, especially remembering what it was like to stand on the podium."

Looking ahead to London, Vogel, a part-time police officer, said she expects the British cyclists to be very strong, especially motivated by their home crowd and an impressive haul of six gold medals from Melbourne.

"Next to the Chinese and Australians, the British are amongst the favourites for the medals," she said.

"We tend to be outsiders, so with a bit of luck we can hope to reach the small final (for the bronze medal).

"It will be a very difficult competition and it will come down to form on the day.

"The hall will be shaking with the noise and I doubt we will be able to hear our own words.

"That will mean a lot of pressure for us, but I will use that shaking hall as motivation."

"Those to watch out for and the ones to count on are Pendleton, Meares, China's Shuang Guo and Lithuania's Simona Krupeckaite," said Vogel.

"Although I think the sprint gold medal will be played out between Meares and Pendleton."