Racing the Tour de France, at least for Stuart O'Grady, is not like fine wine -- it doesn't necessarily get better with age. 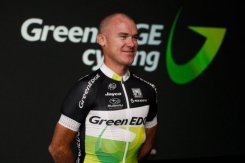 Australian cyclist Stuart O'Grady attends the Greenedge team launch in January 2012. For the Aussie veteran who has been chasing stages, green jerseys, yellow jerseys and suffered as much pain as joy in 13 previous Tour de France campaigns, there's a bonus this year -- riding with a fully-fledged Australian team.

But for the Aussie veteran who has been chasing stages, green jerseys, yellow jerseys and suffered as much pain as joy in 13 previous campaigns, there's a bonus this year -- riding with a fully-fledged Australian team.

"I'm so so grateful that I've had the privilege and possiblity to ride with an Australian team for their first Tour," O'Grady told AFP.

"It would have absolutely killed me if I'd retired and this (team) had popped up before I was able to ride the Tour with them."

Although O'Grady feels a "massive amount of pride", Orica-GreenEdge are not here just to make up the numbers.

In a hectic first week Tasmanian sprinter Matt Goss came close several times to an historic first stage win for the team, and is still in the hunt for the race's green jersey for the points competition.

When the race heads into the high Alps for two days, Australian champion Simon Gerrans, the Milan-SanRemo winner, and Swiss teammate Michael Albasini could be readying themselves to get into a breakaway -- if they get the chance.

"It's the Tour de France, it's bloody hard just to make a breakaway," O'Grady explained.

"And it's not up to you whether you go all the way to the finish, it's up to the teams behind... what structure, the composition of the break, the team's classification, depends on so many different things."

As Australia's defending yellow jersey champion Cadel Evans, of BMC, plans his strategy to close a deficit of 1min 53sec to Briton Bradley Wiggins, Orica-GreenEdge have other plans.

And O'Grady's past experience and ability to read tactics and race situations could become crucial during their own bid for glory.

But having spent his most recent years working for yellow jersey contrenders like Andy Schleck, the 2010 champion, and 2008 winner Carlos Sastre of Spain, he admits he will have to dig into his memory banks.

"It's completely different," he said, laughing as he reminisced about the early years with the Gan and Credit Agricole teams, when winning the race was not a priority.

"Racing like this takes me back to the old days, chasing the green jersey, chasing stages. It's a completely different ball game.

"In team meetings I've gone from (talking about) when the boys were going to attack, which mountain I was going to do tempo up, to time limits and where the intermediate sprints are!

"I've done the full circle, that's for sure."

Surprisingly, O'Grady says racing with a team looking to win the yellow jersey is less complicated.

"I think the GC (general classification) team, from my point of view, is probably less stress. My job was pretty much over by the time we got halfway up the first mountain," he explained.

"It was just a matter of riding up the front and just grinding away.

"Now, you're right in the mix, back up into the danger zone and trying to organise the boys for sprints and the finish.

"It's a lot more stressful, daily stress going for the constant sprint finishes I guess."

But from being one of the few Australians on the race on his 1997 debut to one of 15 in the year that Orica-GreenEdge made history, O'Grady wouldn't have it any other way.

"This is a really special occasion, and for us to be even up there contesting sprints, chasing stage wins is fantastic," he said.

The government’s Centre for Covid-19 Situation Administration on Friday will consider the new status of Covid-19 as an endemic and communicable disease under surveillance.

Somyot sets sights on spots at World Cup and Olympics