Dwight Howard will not be leaving the Orlando Magic for the Brooklyn Nets but Ray Allen and Rashard Lewis joined the NBA champion Miami Heat on Wednesday as a signing moratorium ended. 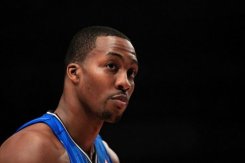 Dwight Howard, pictured in March 2012, will not be leaving the Orlando Magic for the Brooklyn Nets but Ray Allen and Rashard Lewis joined the NBA champion Miami Heat on Wednesday as a signing moratorium ended.

After days of reports and rumors, clubs could finally make official moves and many of them did, but the biggest talent on the potential dealing block, All-Star center Howard, stayed with the Magic.

Talks of a four-team trade deal collapsed when Magic general manager Rob Hennigan ruled out a transfer to the Nets, Howard's preferred destination.

"Anything is possible, but with the talks that we have had up to this point there is probably not a whole lot there," Hennigan said of reviving a Nets deal for Howard.

Hennigan said such a trade would not be in the Magic's best interest, even though Howard could play out a final season and leave on his own terms in another year.

Hennigan said that when he told Howard about his decision, the star big man was "conversational, respectful, professional and business-like."

The Magic are still looking for a new coach, with Hennigan saying a hire could come as quickly as next week.

Hennigan said he has spoken with other clubs about obtaining Howard, a list that reportedly includes the Houston Rockets and the Los Angeles Lakers.

"The priorities that we have are sort of fluid," he said. "I really don't have an answer for X, Y and Z because it's not that simple. It's a mixture of the things based on the variables and the things that exist out there."

The Miami Herald reported Allen rejected a two-year deal worth $12 million to sign with the Heat for $6.3 million over two years. Allen won his lone NBA crown in 2008 with Boston and star teammates Paul Pierce and Kevin Garnett.

"I contributed a great deal to the organization in Boston and they have been so good to me and my family. I was thinking 'Is Miami going to be a good fit for me?'" Allen said.

"There was a moment. I talked to the people around me and they said change is not bad. It was that moment I said this was going to be a great opportunity for me."

Allen is the NBA's all-time leader in three-point baskets and has a career average of 20.0 points a game over 1,148 games with Milwaukee, Seattle and Boston.

Lewis, a 14-year NBA veteran, took a $1.35 million minimum salary to leave the Wizards, who had the second-worst record in the NBA last season. He has career averages of 16.1 points and 5.6 rebounds a game.

"Everybody sets goals over their career and my next goal is obviously to try to win a championship," Lewis said. "The ball can't bounce forever."

Los Angeles Clippers forward Blake Griffin signed a multi-year extension worth a reported $95 million over five years. He has averaged 21.7 points and 11.5 rebounds a game over two seasons with the Clippers.

Also making his new deal official was Deron Williams, who signed with the Nets for $98 million over five years.

Tim Duncan inked a three-year deal with the San Antonio Spurs worth about $34 million, one that should make true the 36-year-old forward's playoff claim of being a "Spur for life."

"Tim Duncan has established himself as one of the best players in NBA history," Spurs coach Gregg Popovich said. "His impact on the Spurs can't be measured. We are all grateful for the leadership and dedication Tim has shown.

"He is an unselfish superstar who loves to compete and has only one goal when he steps on the court -- to do whatever it takes to help his team win. We are all thrilled that he'll spend his entire career as a San Antonio Spur."

Duncan, a two-time NBA Most Valuable Player, has career averages of 20.3 points and 11.3 rebounds a game over 15 seasons, four of them which ended with NBA crowns for the Spurs.

The New York Knicks obtained center Marcus Camby in a sign-and-trade deal with the Houston Rockets but there was no word if the Knicks would match the Rockets offer for free agent guard Jeremy Lin to avoid letting the first NBA Asian-American star leave for Texas.

The Knicks also signed James White, who spent the past three seasons playing in Europe, and guard J.R. Smith.

SONGKHLA: The woman owner of a karaoke shop in Thepha district has been arrested on a charge of trafficking a 13-year-old girl, Provincial Police Region 9 commissioner Pol Lt Gen Nanthadet Yoinual said on Tuesday.

NEW YORK, Ukraine: The four-year-old recognised the low whistle of the Russian artillery shell hurtling toward the Ukrainian town of New York long before his mother had a chance to grab his hand.

The National Anti-Corruption Commission (NACC) has been asked to investigate two senior officials in Yasothon who allowed Jeeraphan Phetkhao, alias Mor Pla, and a crew of reporters to confront ailing renowned monk Luang Pu Saeng Yanwaro at his monastery.

Legacy on the line for Rangers in Europa League final