It may not ensure a medal but the cutting-edge technology at Australia's Institute of Sport (AIS) could prove the difference between Olympic success or failure. 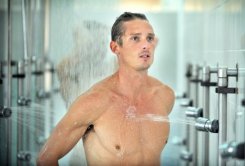 Australian hurdler Brendan Cole, pictured in the recovery contrast shower at the Australian Institute of Sport (AIS) in Canberra, in May. Australia's Olympians will be offered a clinical psychologist in the team's mobile recovery centre for the first time in London, where they can debrief and come for relaxation and other stress-management techniques during competition.

Set across a sprawling campus in Australia's leafy political capital, the AIS isn't much to look at, but the network of concrete buildings, pools and sports fields has turned out some of the nation's biggest sports stars.

AIS director Matt Favier says it's unique in the world in terms of the breadth of services offered in a single place; a one-stop shop for coaching, nutrition, performance analysis, training and recovery.

"We are still renowned, the AIS and Australia, for being pioneers really in a lot of these areas," Favier told AFP.

Every sport has its secret weapons and, in an Olympic year, every advantage counts.

Australia's cycling team has used the latest in satellite and bicycle technology to construct a virtual track which simulates every hill and dip of the London circuit.

By the time the team gets to pre-Olympic training in Europe, riders will be able to cycle the route in front of a plasma screen showing the actual surroundings, and can programme the bike to their exact strength and weight.

The information was gathered in a sneaky operation code-named "Deja-Vu 4", in which AIS scientists and some of the Olympic hopefuls did a test run of the road circuit last August, according to senior physiologist David Martin.

Riders' bikes were fitted out with instruments to measure the route profile and the amount of power exerted at different stages, along with a GPS to plot a geographical map and a camera to film the scenery.

Apart from the obvious strategic benefits, Martin said the simulator gives riders a confidence they wouldn't otherwise have on the Olympic starting line, knowing they have already executed the race scores of times.

"You've faced it so many times before and you're ready to put on a show for the rest of the world," said Martin.

Swimmer Tommasso D'Orsogna is preparing for his first Olympic Games in one of Australia's most coveted events, the 4x100m freestyle relay, and he credits the AIS programme with getting him to his peak.

The training pool is fitted with dozens of cameras, capturing a swimmer's stroke from every angle, and a "wet plate" on the starting block can analyse the nature and amount of force in a dive and turn.

"Skills can become such an important part of racing, especially for 100 freestyle," said D'Orsogna.

"You've got one start, one turn, so you've got to make sure that you nail them because you can really pick up a lot of time on that."

The swim team and a host of other sports have rotated through the AIS high-altitude house as part of their preparations.

But as Australia is flat -- its highest mountain is just 2,228 metres (7,310 feet) tall -- the AIS has built its own altitude chamber: a 14-bed dormitory where athletes can simulate conditions at 3,000m, while training at sea-level.

Michael Roeger, an 800-metre Paralympic runner, swears by the altitude house, which works by pumping nitrogen into the rooms to keep the oxygen level at about 15 percent, which stimulates physiological changes in the body.

Athletes must spend 14 of every 24 hours in the house for a period of anywhere between seven days and a month.

Roeger is at the end of a long, solitary stint and admits he's going a little stir-crazy, but it's worth it.

"The results that I've had the last three years after doing altitude training, especially in the altitude house with the protocol 'live high, train low' has really worked for me," said Roeger.

It's not only in the sports arena that technology has jumped "light years", according to Favier: advances in software and personal computing have dramatically improved coaching and performance analysis.

"You can film on mobile phone, do the analysis on an iPad with Dartfish or another product to do some very sophisticated real-time feedback," he said.

But Favier sees technology as just one ingredient in "baking a gold medal cake" -- a recipe he is hoping could put Australia as high as fourth on the London medals table.

"But I think it's going to be very tough for any nation. It will come down to one or two gold medals, that will be the difference."