Los Angeles Clippers forward Blake Griffin suffered a left knee injury in an US Olympic practice scrimmage and has been flown to Los Angeles for evaluation, USA Basketball announced on Thursday. 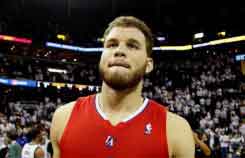 Los Angeles Clippers forward Blake Griffin, pictured in May 2012, suffered a left knee injury in a US Olympic practice scrimmage and has been flown to Los Angeles for evaluation, USA Basketball announced on Thursday.

Anthony Davis, the college star who was selected by New Orleans with the first overall pick in last month's NBA Draft, was called back to the US Olympic training camp after having been cut last weekend and named a US team alternate.

Griffin was hurt on Wednesday in a practice session at Las Vegas, where the Americans were to face the Dominican Republic in their first pre-Olympic tune-up game since gathering a week ago to begin a trek to the London Olympics.

Griffin is expected to undergo an MRI exam to measure the severity of the knee injury.

But any setback at this stage adds uncertainty to a squad already struggling with a lack of height before losing one of its taller playmakers in Griffin, who averaged 20.7 points and 10.9 rebounds a game last season for the Clippers, who managed their first winning season and playoff berth since 2006.

Griffin, the top pick in the 2009 NBA Draft, signed a five-year NBA contract extension with the Clippers on Tuesday night that could be worth as much as $95 million.

Griffin also missed what should have been his rookie season in the NBA with a serious knee injury. He was last year's NBA Rookie of the Year with 22.5 points and 12.1 rebounds a game.

Davis, a teen star who helped the University of Kentucky win the US college crown this year, suffered a left ankle injury during his first workout for the Hornets after the draft but is now healthy and ready to play for the Americans.

Davis was picked with an eye to a possible change in Olympic basketball to a 23-and-under event much the way Olympic football is staged. Davis would be 23 at the time of the 2016 Rio de Janeiro Olympics and a likely US team leader.

But the loss of Howard and Bosh left Tyson Chandler of Chicago as the US team's only true center and losing Griffin will add to the size problem, which US coach Mike Krzyzewski says will be eased by versatility and athleticism.

The Americans will spend the next three days training in Washington before another exhibition game against Brazil.