Kevin Durant scored 24 points and grabbed 10 rebounds as the US Olympic basketball team beat the Dominican Republic 113-59 in their first tune-up for the London Games. 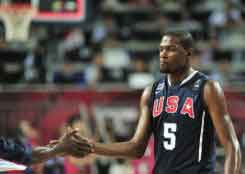 Kevin Durant (pictured in 2010) on Thursday scored 24 points and grabbed 10 rebounds as the US Olympic basketball team beat the Dominican Republic 113-59 in their first tune-up for the London Games.

Durant, the three-time NBA scoring leader whose Oklahoma City Thunder fell to the Miami Heat in the NBA championship series last month, boasts an international pedigree as the Most Valuable Player of the basketball World Championships two years ago.

He came off the bench on Thursday and shot nine of 11 from the field, including five of six three-point attempts.

Andre Iguodala added 18 points and Carmelo Anthony scored 13 for the United States, who suffered another injury blow Thursday when NBA All-Star forward Blake Griffin was diagnosed with a meniscus tear in his left knee that Los Angeles Clippers coach Vinny Del Negro said would keep him out of the Games.

The Americans, who will be defending the gold medal they won in Beijing four years ago, had already been hit by injuries to Orlando center Dwight Howard, Miami stars Chris Bosh and Dwyane Wade and Chicago's 2011 NBA Most Valuable Player Derrick Rose.

Alternate Anthony Davis took Griffin's place on Thursday and was in uniform against his old college coach -- John Calipari of national champions the University of Kentucky, who was coaching the Dominican Republic.

James and Bryant played less than 20 minutes each on Thursday, combining for 11 points.

Al Horford of the Atlanta Hawks shot one of 12 and the Dominicans' other NBA player, Francisco Garcia, missed all three of his attempts.

The Dominican Republic missed out on claiming the last London berth on Sunday, when they fell to Nigeria in the third-place game of the Olympic qualifying tournament in Venezuela.