US college star Anthony Davis has been named to the Olympic men's basketball team, replacing Los Angeles Clippers centre Blake Griffin who is out with a knee injury. 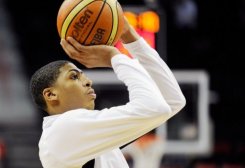 US college star Anthony Davis, pictured on July 12, has been named to the Olympic men's basketball team, replacing Los Angeles Clippers centre Blake Griffin who is out with a knee injury.

USA Basketball announced on Friday the addition of Davis, who was originally cut from the team and then asked to return after Griffin suffered an injury to his left knee during practice on Wednesday.

"We are sorry to have received confirmation of Blake's injury which has forced his withdrawal from the USA team for this summer," said USA Basketball chairman Jerry Colangelo on Friday.

"This is another unfortunate injury, but we have to continue to move on and we're very fortunate to have Anthony Davis."

Griffin underwent an MRI on Thursday and was diagnosed with a torn meniscus which will require surgery to repair.

But the loss of big men, Griffin, Bosh and Howard, leaves Tyson Chandler as the Americans only true centre. Davis, who was the first-overall pick of New Orleans in last month's NBA entry draft, has yet to play a game in the NBA.

Davis scored nine points in a 113-59 exhibition win Thursday night over the Dominican Republic who failed to make the London Games.

Paul has also been sitting out scrimmages since the first day of training camp with a sprained thumb.

"Blake is a proven commodity and if we don't have him, it is a big loss," said US coach Mike Krzyzewski.

The Clippers said Griffin would require arthroscopic surgery but should be ready for the start of the NBA season.

The Americans will spend the next three days training in Washington before playing an exhibition game against Brazil on Monday.