Francesco Molinari is heading to next week's British Open in the best possible form after continuing to lead the Scottish Open at Castle Stuart course near Inverness. 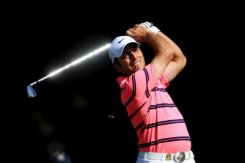 Francesco Molinari, pictured in action in June 2012, is heading to next week's British Open in the best possible form after continuing to lead the Scottish Open at Castle Stuart course near Inverness.

Molinari added a five under par 67 in continuing calm conditions and move to 17-under par and one clear of his rivals.

Less than a week ago, the victorious 2010 Ryder Cup winning star, shot a blistering final round 64 to snare second place in the French Open in Versailles.

Now the 29-year-old, London-based Italian is set to go one better and also join his older brother, Edoardo as winner of the premier Scottish title.

"It was another good day and a 67 is a good score," said Molinari.

"Before I went out today I noticed some of the guys out this morning had gone very low so I feel as though tomorrow is going to be the same.

"So I will have to start again from scratch and just try and play my best."

Denmark's Anders Hansen carded a seven under par 65 to move into second place on 16-under par and one clear of compatriot Soren Kjeldsen and Scotland's Marc Warren, who were among three players to post 64s.

Kjeldsen's round included four opening birdies while playing partner, Warren capped his round with by driving the front of the green at the shortened par four, 16th and then holed an 80-foot eagle putt.

And four-time Major winning Phil Mickelson continues to improve heading to next week's British Open with the visiting American adding a 65 to be sharing fifth place with three others on 14-under par.

"I have played well the last two days and I'm looking forward to a fun round tomorrow," he said.

"Certainly I'll be trying to make a run at the lead but no more than that.

"I feel my game is starting to improve each day and I'm very happy that I made the decision to play here at the Scottish, hopefully a good round tomorrow will give me some momentum heading into next week, as well."

And while in Inverness, Mickelson played 13 holes on Friday night at nearby Nairn Golf Club, and the venue for last month's Curtis Cup and host course for the 1999 Walker Cup that featured current world number one Luke Donald.

However Mickelson confessed his visit had nothing to do with continued preparation for next week's 141st British Open.

"As I get more into golf course architecture I like to see marine golf courses and the beauty of Nairn is its simplicity," said Mickelson.

"It is just a beautiful straight-forward test. It has a lot of quaint little challenges and little hazards here and there that gave me some fun ideas that I can try and integrate into some of my own designs.

"I had been wanting to play Nairn for some time and really enjoyed the experience."

Donald, the defending champion, carded a third day 68, to be among those tied in ninth place at 13-under par.