Andre Villas Boas's bitterness at his sacking by Chelsea last season surfaced again on Sunday as he said his new club Spurs did not seek out scapegoats if they were going through a bad patch. 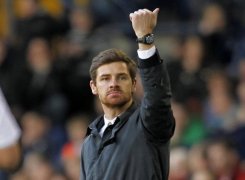 Chelsea's former manager Andre Villas-Boas gestures during a match in March. Now manager of Spurs, Villas Boas's bitterness at his sacking by Chelsea last season surfaced again on Sunday as he said at his new club they did not seek out scapegoats if they were going through a bad patch.

The 34-year-old Portuguese - who lasted just 256 days at Chelsea before owner Roman Abramovich lost patience after a run of just one win in six Premier League games and sacked him - said Spurs chairman Daniel Levy had a better feel for football than Abramovich.

"I met the (Spurs) chairman (Daniel Levy), and saw the way he goes about his business at the club," said Villas Boas, who arrived at Chelsea on the back of a stellar season at Porto guiding them to several trophies including the league title and the Europa League.

"He knows what he is doing, approaching the market in a different way. He is a person of great football understanding and he had the effect of giving me the assurances I wanted in terms of building something."

Villas Boas, who was named Spurs coach on July 3 succeeding Harry Redknapp, said that Spurs style of adventurous football should suit him down to the ground.

He said he wanted to emulate the achievements of legendary coach Bill Nicholson who in a 16 year reign (1958-74) delivered a domestic double (1961) and two further FA Cups as well as the 1963 Cup Winners Cup (now defunct) and 1972 UEFA Cup (now the Europa League).

"Tottenham are linked with great football in the past," said Villas Boas, who earlier in the week claimed he should have got some credit for Chelsea going on to win the FA Cup and Champions League under his replacement Roberto di Matteo.

"It is something they have always valued highly. There is a wonderful history of attractive football, and Bill Nicholson left these messages of football well played and doing things in style, which is what I want to achieve as well.

"The structures that surround Tottenham are extremely good. There are competent people in and around the football club. The club is driven towards success, and everybody knows they must play a part in achieving that success.

"They are not looking for certain scapegoats, and when so many people are striving forward, it makes your job easier."

Villas Boas, whose side ironically will have to contest the Europa League as Chelsea's win in the Champions League saw them take Spurs place in next season's premier European club competition, said he had not received the promised backing for his project at Chelsea.

"Words did not meet the actions of what we were doing [at Chelsea] in terms of the project, so I think I was cut short," he said.

"This club (Tottenham) is much more important than me and what I have to do is try to take them to success and not make it a personal issue."

Villas Boas said that in terms of players he was willing to let Croat star Luka Modric go but not Dutch playmaker Rafael van der Vaart.

"With Van der Vaart, at the moment I am absolutely counting on him," he said.

"It is a totally different situation from Luka (Modric), who has been chased by different clubs in the past two seasons and is continuing to drag interest.

"We have to make sure the club's interests are met and it is up to the chairman to decide that."

HANOI: Vietnam and South Korea aim to raise the value of bilateral trade between the countries to US$100 billion next year and to $150 billion by 2030, up from $78 billion last year, the Vietnamese government said.