Kevin Pietersen must make himself available unconditionally for all England limited overs cricket if he is to help the side defend their World Twenty20 title in Sri Lanka in September, according to coach Andy Flower. 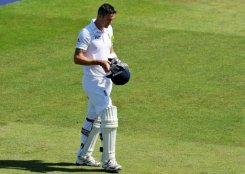 England's Kevin Pietersen (shown in May) must make himself available unconditionally for all England limited overs cricket if he is to help defend their World Twenty20 title in Sri Lanka in September, says coach Andy Flower. The 32-year-old, England's top batsman, quit white ball internationals after management refused to let him to appear in Twenty20 matches while opting out of 50-over games.

The 32-year-old, arguably England's most talented batsman, quit white ball internationals after team management refused him his wish to appear in Twenty20 matches while opting out of 50-over games.

However, the terms of an England and Wales Cricket Board (ECB) central contract prevent players picking and choosing formats and team management held firm, fearing an exodus of leading names from the one-day side if they gave Pietersen his head.

But Pietersen, speaking after warming-up for next week's first Test against his native South Africa with a superb unbeaten 234 for Surrey against county champions Lancashire, said he would love to play for another three or four years in all forms of cricket -- but only if something could be "sorted out" about the "nightmare" schedule.

Pietersen was man of the tournament when England won the World Twenty20 in the Caribbean two years ago but, unless he has a dramatic change of heart, Flower does not expect the 2012 squad will include the star batsman.

"As things stand at the moment, no," Flower told the Mail on Sunday.

"The situation is the same as it was when he first approached us. The ECB are determined to protect all three formats of the game and part of that is not setting a precedent of allowing players to retire from one-day cricket alone."

Flower insisted he was sorry Pietersen was no longer involved in a limited overs set-up where England have won their last 10 one-day internationals.

"I think it's sad for a player in his batting prime not to be playing all forms of international cricket, something that a lot of the guys work very hard for but are also very lucky to have the opportunity to do," he said.

"So I would hate for him to get to the end of his career and look back and think, 'Oh damn, I wish I hadn't missed the World T20 or the 2015 World Cup'," the former Zimbabwe batsman added.

"Maybe he won't. Maybe he's a very... well he is a very different person to me, so he might not think that way at all."

Pietersen's critics have claimed he could have the break from cricket he said he needs were he to opt out of the lucrative Twenty20 Indian Premier League.

Prominent activist Arnon Nampa took aim at the government for "threatening" the pro-democracy movement at a protest Sunday -- a day after his bail release on sedition charges for his role in a recent rally.

WASHINGTON: The United States has registered over five million cases in the coronavirus pandemic, Johns Hopkins University's real-time tally showed Sunday, as well as over 162,000 deaths as the country struggles to control the disease.

BEIRUT: Lebanese protesters enraged by official negligence blamed for Beirut's enormous and deadly explosion vowed Sunday to rally again after a night of street clashes in which they stormed several ministries.