Tiger to play alongside Garcia, Rose at Open
Sports

Tiger to play alongside Garcia, Rose at Open

Tiger Woods will play alongside Spain's Sergio Garcia and England's Justin Rose in the first and second rounds of the 141st British Open, according to groups and tee times released Monday. 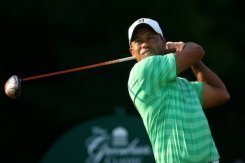 Tiger Woods hits his tee shot on the 12th hole during the second round of the Greenbrier Classic at the Old White TPC in White Sulphur Springs, West Virginia, on July 6. Woods will play alongside Spain's Sergio Garcia and England's Justin Rose in the first and second rounds of the 141st British Open, according to groups and tee times released Monday.

Woods, a 14-time major champion chasing the all-time record of 18 majors won by Jack Nicklaus, tees off with Rose and Garcia at 9:42 on Thursday morning in round one at Royal Lytham and at 2:43 in the afternoon on Friday.

Garcia and Rose have never won a major but they figure to draw the largest crowds in the early rounds at the par-70 Lancashire layout, especially with several other notable groups nearby.

Defending champion Darren Clarke of Northern Ireland will be joined by Zach Johnson of the United States and South Africa's Ernie Els at 9:09 a.m. Thursday, three groups in front of Woods, Garcia and Rose.

Northern Ireland's Graeme McDowell will start in the group immediately in front of the Woods group, playing alongside American Dustin Johnson and Japan's Hiroyuki Fujita.

Thursday afternoon's late starters include a trio of impressive groups.

In the group just behind them will be Ireland's Padraig Harrington, a two-time British Open champion, with US standout Rickie Fowler and Austrian amateur Manuel Trappel.

World No. 1 Luke Donald of England tees off in the next group at 2:43 p.m. along with Australian Geoff Ogilvy and four-time major champion Phil Mickelson.

American Webb Simpson, who owns last month's US Open title, withdrew from the event to be with his wife for the birth of their second child.