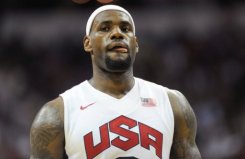 "King James" will lead the United States squad of NBA stars into the London Olympics as a favorite to defend the title he helped the Americans claim in 2008 at Beijing.

"We've gotten younger, we are more athletic and a lot of great guys are part of this team," James said. "It's a great place where we are and we look forward to being the best."

James, the 2004 NBA Rookie of the Year, left the Cleveland Cavaliers in 2010 to join the Heat in search of an NBA crown. Miami lost to Dallas in last year's final but bounched back and defeated Oklahoma City in last month's NBA Finals.

"He got that monkey off his back. Now he has a chance for icing on the cake," USA Basketball chairman Jerry Colangelo said.

James could become the first NBA player since 1992 Chicago and "Dream Team" icon Michael Jordan to win an NBA title and Olympic gold in the same year while also being voted the NBA Finals and NBA regular season Most Valuable Player.

"I'm trying to lead these guys in the right direction," James said. "I'm going to try to help these guys win the gold medal."

James has tried to play down his role in favor of the team concept vital to the US chances for Olympic gold, but his evolution as a clutch playmaker from a player hesitant to take crucial shots has made him a much-improved NBA threat.

James withstood the grind of playing 66 regular-season games in a compressed four-month season, then battled through two months of playoff games for the title that had eluded him.

Two weeks after holding the NBA championship trophy aloft, James reported to his first practice at US Olympic training camp.

"I've got a love for the game and a great respect for representing my country," James said.

"Everybody is competitive. That's why we are here. We all hate to lose."

Los Angeles Clippers centre Blake Griffin was added to the injury list last week with a knee injury to be replaced by college star Anthony Davis.

But James sees no loss of talent despite the absence of several big names.

"We have some guys that can help pick that up," James said. "We have players who can do some great things. It doesn't matter who starts. Guys are going to make sure they make plays in order to help the team."