Record England rainfall has produced a dense and deep rough at soggy Royal Lytham for the 141st British Open, with major golf champions warning rivals to stay in the fairways or stay away. 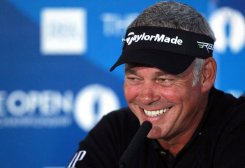 Darren Clarke of Northern Ireland speaks during a press conference at Royal Lytham and St Annes in Lytham. Record England rainfall has produced a dense and deep rough at soggy Royal Lytham for the 141st British Open, with major golf champions warning rivals to stay in the fairways or stay away.

"There are a few patches out there where it's absolutely brutal," defending champion Darren Clarke said. "If you start spraying the ball around this week you might as well go home. There's no chance coming out of this rough at all."

With 206 pot bunkers as well as the deep grass, there are few safe spots for errant drives. Even the temporary car park area where the late Seve Ballesteros landed in 1979 on his way to an amazing birdie at 16 and a victory is no more.

"I've never seen the rough this high or thick and dense," said 14-time major winner Tiger Woods. "It's just that you can't get out of it... in some places it is almost unplayable."

Masters champion Bubba Watson, who hooked his own jaw-dropping shot onto the green from the trees in a playoff to win his first major title last April, has had to change his long-hitting style to adapt to the unforgiving links course.

"The rough is pretty bad," Watson said. "You hit it in high rough like that, hit it off line, it's very difficult. Hopefully you can find your golf ball.

"It's all about hitting the right shot off the tee to avoid some of the bunkers, avoid the high rough and hitting some quality iron shots into the greens."

Escaping the rough at Royal Lytham is one thing and avoiding the bunkers is quite another task on the par-70 Lancashire layout.

"It's just a nightmare," Clarke said. "They are very penal, very tough, those bunkers. They have reverted a lot of the faces, so some of them are a little bit more penal than others.

"There's going to be occasions this week where I think you're going to have to see guys taking penalty drops out of them because they won't be able to move their ball anywhere. It's very heavily bunkered in the landing areas where we really need to hit the ball.

"Accuracy is going to be the key this week. It's not really length. It's keeping it on the fairways. There are a few holes out there where prudence may come into play. If you have 220 to the green for your second shot, it's better than having to chip it out sideways or backwards out of the bunkers."

More downpours are expected all week, the drenching adding to the misery for players whose patience is already being tested.

"Nobody wants to play in those conditions, but it's one of those things," Watson said. "It's just another challenge the course is going to bring to you. You just have to try to stay dry and make pars. When the weather gets that bad, sometimes bogeys are good."

Watson does not see any edge for European players who are more accustomed to dreary weather.

"It's whoever can control their mind and not get frustrated about the weather and the situation," Watson said. "No matter where they are from, everybody has got to deal with this weather.

"It's not whether you've played in the rain more than somebody else. It's just about calming your mind and knowing it's going to be difficult."

Weather can play havoc with one set of players and turn benign for another during the same day, giving an edge to one portion of the draw or the other.

"Being on the right side of the draw always plays a part in the Open," said Clarke. "You get good sides, bad sides. The scoring can differ massively because of those weather conditions. But that's part and parcel of the Open."

They tee off at 9:42 on Thursday morning in round one and at 2:43 in the afternoon on Friday.

Clarke will be joined by South African Ernie Els and American Zach Johnson three groups in front of Woods and just ahead of Watson, Japan's Yoshinori Fujimoto and World No. 2 Lee Westwood of England.

World No. 1 Luke Donald, seeking his first major title like Westwood, tees off in the opposite end of the draw with Australian Geoff Ogilvy and four-time major champion Phil Mickelson.