Royal Lytham and St Annes will host the British Open for the 11th time Thursday with Lee Westwood and Luke Donald spearheading home hopes and Tiger Woods out to end four years of majors misery. 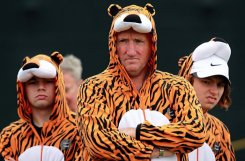 Golf spectators wearing tiger suits wait for Tiger Woods of the US at Royal Lytham and St Annes in Lytham, north-west England, ahead of the 2012 British Open Golf Championship which begins on July 19.

Whoever holds aloft golf's oldest trophy on Sunday will have conquered not only 156 rivals, but also a fierce combination of 206 pot bunkers, thick rain-sodden rough and the latest installment in a miserable English summer.

Many, like two-time former Open champion Padraig Harrington, believe it could get attritional, although the Dubliner says he welcomes that.

"I know myself, if you have 72 holes of a rainy tournament, it's nearly last man standing at that stage, and that's really difficult for everybody.

"I would like to see certainly 18 holes, if not 36 holes of difficult conditions because that will cut enough of the field out, and hopefully I won't be one of those."

But the gaping bunkers are its main defence network, strategically placed to punish the slightest of skewed shots, especially off the tee. Hit into one of them and a dropped shot is the likely result.

Before this year, it was considered to be up there with Carnoustie as the most difficult of the Open Championship venues.

Now with the added length and the deepening of some bunkers, Lytham's head pro of 25 years, Eddie Birchenough, believes it may be the toughest test on the Open rotation.

"I suspect the fact we've got a few holes lengthened, a new seventh hole and rough up to your armpits, it might just make us the toughest of the lot," he said.

A look down the long list of previous winners of the Open on the Fylde Coast reveals a long list of superb ball-strikers from the legendary Bobby Jones when it was first held here in 1926 through Peter Thomson of Australia, Gary Player of South Africa, Spanish legend Seve Ballesteros and New Zealand left-hander Bob Charles.

The last two winners at Royal Lytham have both been American, Tom Lehman in 1996 and David Duval in 2001, and Woods will be out to make it three US wins in a row.

The 36-year-old, 14-times major champion has blown hot and cold this year as he strives to complete work on swing changes that he was told would be necessary to accommodate knee injuries that have required four rounds of surgery.

Woods has won three times on the US PGA Tour this year, but he has also missed the cut in two tournaments and has disappointed in the first two majors with a tie for 40th at The Masters and a tie for 21st at the US Open last month.

But he says he likes The Open as a tournament, appreciates the toughness of the golf course and has the patience to keep going in his quest to overhaul the record 18 major victories of Jack Nicklaus.

"I just try and put myself there. I think that if I continue putting myself there enough times then I'll win major championships," he said.

"First of all, I had to go through that whole process of just getting healthy again. Being banged up and missing major championships because of it in a couple year stretch there wasn't a whole lot of fun.

"I think I missed four majors there just because I was injured. I figure if I'm healthy, then I can prepare properly for major championships and I can get myself there."

For World No. 1 Donald and World No. 3 Westwood, the task on hand is not so much to overhaul Nicklaus, but simply just to win a single major -- which both have failed to do in a combined 93 attempts.

Both say that relaxing and staying in the moment is the key, but whether they will succeed in emulating Tony Jacklin, the last Englishman to win The Open on English soil 43 years ago, remains to be seen.

There are a number of fascinating sub-plots with Darren Clarke looking to rediscover the zen state of mind that saw him pull off a huge upset last year at Royal St George's, while fellow Ulsterman and second-ranking Rory McIlroy wants to show that he can handle bad weather conditions.

Then there is the possibility of a fourth straight US win in the majors after Keegan Bradley at last year's US PGA Championship, Bubba Watson at the Masters and Webb Simpson at the US Open.

That would mean that all four major titles would be in American hands for the first time since 2004.