Hearn desperate to use his Midas touch on Muay Thai expansion

East Londoner Barry Hearn is known as the man with the Midas touch. 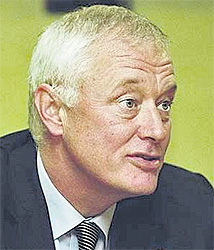 His many successes in sports promotion include turning a chain of snooker halls into the world's most popular Premier Snooker League that's televised around Europe.

Armed with a singular vision and a business strategy of "aim high and thrive," Hearn has turned professional darts into a multi-million dollar revenue earning corporation.

I was fortunate enough this week to meet the famous British sports innovator in the gracious surroundings of the Waldorf Hotel in central London.

The purpose for our meeting in such an elegant setting was to hear Hearn's plans to position Muay Thai as the new wave combat sport for Britain and Europe.

"I see Muay Thai as the sleeping giant of martial arts," he said.

"Those who are involved with Muay Thai get excited about the Thai heritage combat sport. That excitement has been making waves around the world and it's got support in Britain.

"The timing is now right for Muay Thai to get to the next level. It needs a big event and BEC Tero's Battle for the Belts events with seven WBC world championships is the sort of event that excites me.

"Bringing seven Muay Thai champions to London in one big event will create a big wave for the premier stand-up combat sport that will spread through Europe."

Hearn is busy finalising the final card for BEC Tero director Brian Macar who will fly to London on July 29 to meet with the four British fighters who will be challenging four of the seven reigning champions.

Hearn says he won't get involved with any sport unless he is sure that the competitors are intent on winning.

As a pioneer of new wave sports, Hearn's formula for success is that he gives people what they want.

"I've been involved with WBC boxing in Britain for many years. There are aspects of professional boxing that can pave the way for Muay Thai popularity on the world stage.

"Combat in the ring can only thrive if there are international rules and safety standards. Professional boxing has shown how boxing can be safe for public consumption and Muay Thai is following the boxing genre, but with the extra weapons that appeal to the new generation of sports combat fans."

Hearn is confident that the seven world title event being planned will be a sellout in London.

Hearn has been a promoter of boxing since the 1980s. His first big promotion was Frank Bruno against Joe Bugner.

Since then he has promoted many leading British and Irish boxers including Lennox Lewis and Herbie Hide.

In April 2008, Hearn started the Prize Fighter series which is a knockout tournament featuring eight boxers in a last man standing format.

While his son Eddie has taken the reigns of the boxing business, Barry is keen to take the pole position to steer Muay Thai into popular appeal across Europe.

Hearn sees his union with Macar as "a perfect fit" and has observed over the years BEC Tero's impressive track record of success in staging big entertainment shows and sports events like the Thailand Open tennis tournament.

Macar and Hearn share an affinity in their passion for football.

Hearn has been chairman of English club Leyton Orient since 1995 while Macar has been the driving force behind BEC Tero football club.