Ivanovic crashes out of WTA Montreal

Former world number one Ana Ivanovic suffered her first ever double bagel loss, crashing out of the WTA Montreal tournament after losing 6-0, 6-0 to Roberta Vinci. 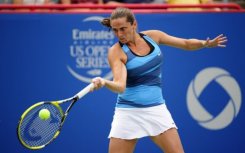 Roberta Vinci of Italy hits a return to Ana Ivanovic of Serbia during round two of the Rogers Cup at the Uniprix Stadium, on August 9, in Montreal, Quebec, Canada. Ivanovic suffered her first ever double bagel loss, crashing out to Vinci, 6-0, 6-0.

Vinci on Thursday needed just 44 minutes to oust the 11th seeded Ivanovic, who had three game points in the match but never converted.

Ivanovic had game point serving at 0-4 in the first set and two more serving 0-2 in the second.

"I really struggled to find my rhythm out there," the Serb said. "It came as a surprise a little bit because I was practising really well.

"I was struggling to find my feet and get two consecutive balls in the court. Against players like Roberta who don't make many errors, it's always going to be tough to win like that.

Vinci didn't expect such an easy victory. She came from behind to beat Yanina Wickmayer in the first round.

"It's not easy to win 6-0 6-0 against a great player like Ana," Vinci said. "I was playing really consistently with a lot of slice -- and she doesn't like my slice. I think that was the key. I've played against her a lot of times, and it was strange to play her when she was playing like this."

Jankovic has now lost her opening match at 12 of her last 16 tournaments.

"It couldn't have been better, to be here in front of the home crowd and make the third round at a big tournament like this," Wozniak said. "I was trying to not give her any rhythm, in fact I was trying to make her make mistakes. I was going for my shots, but I was trying to do as few errors as I could at the same time."