Washington's playoff drought over after 79 years

For the first time since 1933, the Major League Baseball playoffs are coming to the American capital city. 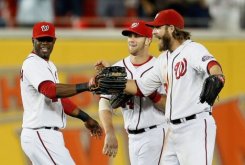 Roger Bernadina (L), Bryce Harper (C), and Jayson Werth of the Washington Nationals celebrate after defeating the Los Angeles Dodgers 4-1 to clinch a playoff birth at Nationals Park on September 20, 2012 in Washington, DC.

The Washington Nationals defeated the Los Angeles Dodgers 4-1 on Thursday to clinch a National League playoff berth, the first for a Washington team since the now-defunct Senators lost the 1933 World Series to the New York Giants.

The Nationals, with the best record in the major leagues at 91-58, had only qualified for the playoffs once, back in a lockout-shortened 1981 season when the club was based in Montreal and known as the Expos.

The Expos, who lost to the Dodgers in the National League championship playoff series back in 1981, relocated to Washington in 2004.

Nationals pitcher Ross Detwiler allowed only one run in six innings while Ryan Zimmerman and Danny Espinosa each smacked run-scoring doubles and relief pitcher Drew Storen struck out the last three batters in the ninth inning to secure the victory.

The Nationals stretched their lead over the Atlanta Braves to 5 1/2 games in the National League East division and will clinch a division crown with any combination of eight Washington triumphs or Atlanta losses in the final two weeks of the season.

Australia's Paine 'devastated' by Pucovski concussion ahead of Ashes

It might be now or never for old, experienced LA Lakers