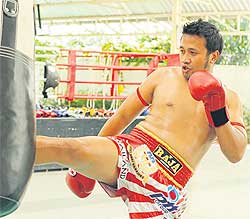 Manus, who won gold at the 2004 Olympics and silver at the 2008 Games, said he liked Muay Thai after a recent exhibition match in his home province of Ratchaburi.

The 32-year-old, who quit amateur boxing after he failed to get his third Olympic berth last year, said he will fight in an international event in December.

Once a playboy of Thailand's amateur boxing, Manus insists he is now a changed man and has been training hard for a successful career in the country's traditional martial art.

He ridiculed a reported match-up between Muay Thai superstar Buakaw Banchamek (Por Pramuk) and Filipino Manny Pacquiao, one of the best pound-for-pound fighters in international boxing.

"Who will pay about 90 million baht to bring Pacquiao to fight here?" Manus asked.

He said it would be risky for Buakaw to face a fighter who is good at punching because he could be fragile to the weapon.

"Everybody in Thailand's boxing circle knows that Buakaw cannot be punched," Manus said.

"I don't know who raised the idea of pitting him against Pacquiao."

He then challenged Buakaw to fight him instead.

"If there is anyone who is interested in promoting a fight between Buakaw and me, I am ready to give him a few boxing lessons," he said.