Star-studded race one more step toward the big stage
Sports

Star-studded race one more step toward the big stage

Thailand will gain a lot from organising the Race of Champions in Bangkok in December, officials said yesterday. 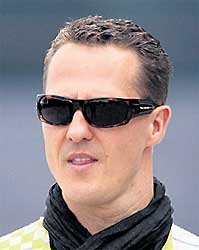 The 2012 edition, which is officially called the Red Bull Race of Champions, will be held at Rajamangala National Stadium from Dec 14-16.

Thailand, which will also host next year's race, will be represented by Sandy Stuvik and Trin Sritrai.

The participants will vie for the team title (ROC Nations Cup) and the individual trophy (Race of Champions). Kanokphand Chulakasem, governor of the Sports Authority of Thailand (SAT), told a press conference.

"It is an honour for the country to celebrate the 25th anniversary of the event," he said.

Thailand invested about 400 million baht to host this year's race with the government shouldering about 60 per cent of the sum.

"We should make about 100 million baht in profit," Kanokphand said, insisting the Race of Champions will pave the way for Thailand to host a Formula One Grand Prix. "We will get credibility. It will also help boost our tourism and economy. I am sure that the event will be exciting."

Kanokphand met Formula One supremo Bernie Ecclestone a few weeks ago and he claimed Ecclestone had agreed for Thailand to host a race in 2014.

Meanwhile, Michael de Santiesteban from Red Bull Racing said the event, which will be held outside Europe for only the second time, was brought to Thailand by Red Bull Racing boss Chalerm Yoovidhya.

"Bangkok has a unique culture that can easily attract the world. That was why it was picked up ahead of other cities to host the 25th edition of the event," he said. "In the past few years, Thailand suffered a lot from political and natural problems. This event will show the world that Thailand is a country to visit."

Many activities will also be held at Rajamangala with Yamaha world champion Jorge Lorenzo among the participants.

Tickets are available at Thai Ticket Major, call 02-262-3456 or go to www.thaiticketmajor.com

Sandy of the Interwetten.com Racing team earned 140 points at the eight-event series.

The winner was Englishman Jack Dennis of the Fortec Motorsport team who gained 376 points.