Lumpinee set to hang up its gloves
Sports

Lumpinee set to hang up its gloves

Famed boxing stadium moves to a new site in 2014

The bell for the final round is set to be rung on the renowned - and somewhat notorious - Lumpinee Boxing Stadium after many decades as the greatest attraction for muay Thai fighters in the country.

An artist’s impression of the new Lumpinee Boxing Stadium, which is now being constructed at the army’s sports facility on Ram Intra Road in northern Bangkok.

The stadium on Rama IV Road is a stone's throw from the former site of the Armed Forces Academies Preparatory School in the busy Bangkok commercial and tourism district.

Cramped for space, the 3-rai stadium sits on prime real estate which its owner, the Crown Property Bureau, is considering for commercial development.

The Army Welfare Department has decided the stadium, which it runs, needs a bigger home away from the traffic-clogged heart of the city.

The army has granted permission for the use of its sports facility on Ram Intra Road on which to build a new, spruced-up stadium.

The old stadium, which will close its doors in early 2014, will leave behind a legacy.

It was established in 1956 on the order of former military strongman Prapass Charusathiara.

He had the stadium built while he was commander of the 1st Division, King's Guard, in Bangkok.

The stadium project came into being as a rival to the older Ratchadamnoen Boxing Stadium on Ratchadamnoen Nok Avenue in terms of facilities and standards.

Lumpinee has hosted so many historic matches over the decades that it became the mecca for muay Thai boxers the world over. Winners at Lumpinee are held in high esteem by boxing professionals.

Champions of the two prestigious stadiums often compete in sold-out matches and the stakes for the winners hit the roof.

Lumpinee is open between 6pm and 10pm on Tuesdays and Fridays and between 5pm and half past midnight on Saturday. No boxing matches are held on religious holidays.

Maj Gen Surakai Chuttumart, director of the Army Welfare Department who is also Lumpinee Boxing Stadium master, said the army laid a ceremonial stone foundation for the new stadium on Aug 21. The event was presided over by army chief Gen Prayuth Chan-ocha, who chairs the executive board of the stadium. 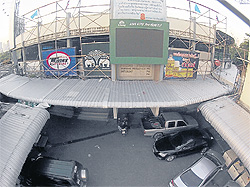 Maj Gen Surakai said the new stadium will be fully equipped and integrated with modern facilities and technological features on offer. It is designed to provide convenience and accessibility to physically challenged people.

The stadium will have three buildings, the main one containing the principal boxing ring and which will be air-conditioned.

It will have 500 ringside seats, 800 seats on the second floor and 2,500 seats on the third floor. Combined with those with standing tickets, the ring can accommodate up to 8,000 people.

The second building will have staff offices with rooms for important guests. It will also have an exhibition hall detailing Lumpinee's history and a Thai boxing museum.

The third is a five-storey building. Boxers will train on the first floor, while the second to the fifth floors will be reserved for car parking space.

The new stadium will cost 380 million baht to build and construction of the foundations is proceeding.

"A gigantic monitor will be put up outside the stadium to relay major tournaments," Maj Gen Surakai said.

He promises the new stadium on 6 rai of land will deliver an audio and visual spectacle of the first order.

However, Maj Gen Surakai expected the new facility might attract fewer customers in the early months of its opening as people are not familiar with its location which is far from the city centre.

His vision is to spread the word about the art of Thai boxing on a global scale. Matches at Lumpinee Boxing Stadium are broadcast live on the Thai Global Network to 177 countries.

Maj Gen Surakai said the new stadium, scheduled to be inaugurated in February 2014, will be served by a comprehensive transport network.

The new facility will also come with new plans by the management to seek the cooperation of boxing promoters to avoid choosing boxers who "are more into fancy footwork" to fight at the stadium.

He said boxing matches used to be more rousing than they are now.

"These days, boxers tend to be a lot less forceful and forthcoming with their moves in the ring ...They put more focus on physicality and this is where the allure of muay Thai is losing its shine," he said.

Thais to go all out for victory