Thaworn, playing one flight in front of Ramsay, birdied the last hole in regulation play when his seven-iron approach shot landed about one foot from the hole as he closed with a five-under-par 66.

Ramsay, the overnight leader, needed a par putt on the last for victory but made a three-putt bogey for a 68 as the pair returned to the par four 18th hole at the Karnataka Golf Association course.

The Scot then blasted his tee shot into a creek and was penalised. His third shot landed in the back of the green and he chipped to about 10 feet past the hole as he two-putted for double bogey. 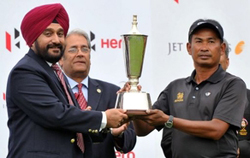 Thaworn, who won the Hero Indian Open in 2005, made a two-putt bogey for victory after hitting his second shot into the greenside bunker. His win pushed him to the top of the Asian Tour Order of Merit.

"To be honest, I didn't expect to win with the way I was driving the ball this week," he said, according to a statement from the tournament organisers.

"It means a lot that I've won a second Hero Indian Open title and that I'm now leading the Asian Tour Order of Merit."

Thaworn, who was two shots off the lead at the start of the day, struggled with his driver but rallied with acute iron play and a sharp short game in a round of six birdies against one bogey.

"I think I only found two fairways in regulation and I didn't see where Richie was on the 18th hole until the crowd started shouting. It was a huge surprise to me but I'm glad I won," he said.

Ramsay rued an unlucky break in the play-off as his remarkable third shot, which he hit over the trees, landed in a pitch mark just after the green.

Rising Thai star Panuphol Pittayarat bogeyed the last hole to finish one shot from the play-off. Shiv Kapur was the best Indian golfer as he shot a 66 for fourth place on 272.

Anirban Lahiri of India, a two-time Asian Tour winner, Arnond Vongvanij of Thailand and Jaakko Makitalo of Finland were a further two shots back in fifth place.