New ski rules - safer or a step back in time?
Sports

New ski rules - safer or a step back in time?

New ski regulations have caused a heated debate on the World Cup circuit, but the true test of how this will effect performances will come here this weekend's in the opening races of the season. 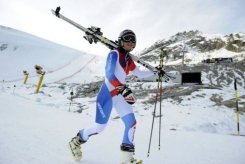 Swiss alpine skier Wendy Holdener pictured after a training session on October 26, 2012 on the eve of the woman's giant slalom at the FIS World Cup in Soelden, Austria. New ski regulations have caused a heated debate on the World Cup circuit, but the true test of how this will effect performances will come here this weekend's in the opening races of the season.

The move however has drawn widespread protests from athletes and ski-makers, with close to 200 skiers -- including top names like Julia Mancuso, Maria Hoefl-Riesch, Tina Maze, Ivica Kostelic, Bode Miller and Aksel Lund Sindal -- signing a petition against the move.

"The new rules... will eventually ruin this sport," US skier Ted Ligety, one of the most outspoken opponents to the changes, vented on his blog.

"FIS is imposing new ski regulations that turn back the clock on the evolution of this sport," he added.

"Nobody's really happy about it... The pros will get a hang of it very quickly but for the young ones it will be a lot harder," Rainer Salzgeber, race manager for ski-maker Head, added more recently.

The new rules see the men's minimum ski length go from 185 centimetres (72.8 inches) to 195 cm in the giant slalom, the discipline seen as most likely to be affected by the changes.

For the women, skis will have to measure at least 188 cm compared to a previous 180 cm.

Moreover, the so-called radius -- or curve -- of the skis has also increased.

Unlike early ski models which had completely straight sides, skis in recent years have been acquiring an increasingly hour-glass shape, with a wider front and back and a narrow middle, where the boot is fixed to the ski.

In other words, skis will now be longer and straighter.

"It's significantly less aggressive now, but more difficult to do a turn. It's more demanding, you have to be more active while racing," Austria's Benjamin Raich, who pushed for the changes, admitted in a recent interview.

Critics are concerned that young skiers will struggle with the new equipment, as it requires more energy, and that it could lead to more falls and a different set of injuries.

Taller, heavier athletes will also have an advantage and snow conditions will play a bigger role than before.

"On hard slopes, you will hardly see any difference... when you put pressure on it, the ski bends (in a turn)," noted Marcel Hirscher, last season's overall World Cup winner.

But in soft conditions, "it won't bend anymore and you'll just go straight because the ski is straight," said the Austrian, insisting that races would then become "unwatchable."

Skiers that are technically clean could benefit, while allrounders might have trouble keeping up with the specialists, experts say.

As the athletes have had time to adjust to the new skis, the consensus seemed to be to "wait and see" ahead of the women's and men's giant slalom races this weekend.

"During the first tests right at the end of last season, it was still a little unfamiliar. But after training a lot and intensively over the summer, I'm handling it fine. I'm curious how the first races will go," said Germany's Maria Hoefl-Riesch.

Even Ligety has found a silver lining.

"I still believe they are not safer, they will be hell for younger, smaller FIS kids and they don't turn in soft (snow)."

"Though interestingly enough, the speed skis are way easier for me to ski on," he posted on his blog.