France international lock Pascal Pape has signed a new three-year contract with Stade Francais, keeping him at the Top 14 outfit until 2016, the club announced on Friday. 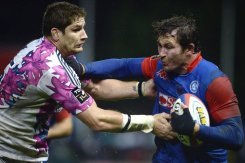 The deal follows the three-year extension recently handed to 21-year-old fly-half Jules Plisson and ends speculation that Pape might leave the capital after prolonged interest from Toulon.

"Having arrived for the 2007-08 season, the second row forward who has made more than 100 appearances for the club is now set to finish his career in Paris colours." a Stade Francais statement confirmed.

The 32-year-old Lyon-born forward began his career with Bourgoin in 1998 and spent eight years with the club before a two-year spell with Castres.

He has made 42 appearances for France and is currently the stand-in captain due to the absence of injured skipper Thierry Dusautoir.

A member of the France team that won the 2010 Grand Slam, Pape also featured at the 2011 World Cup and was on the losing side in the final against New Zealand (7-8) at Eden Park in Auckland.

Stade Francais are currently languishing fifth from bottom in the French top flight with three wins from seven matches and are 17 points behind leaders Toulon.