The former chairman of the World Anti-Doping Agency (WADA) said Sunday that revelations of pervasive doping in cycling is a vindication of anti-doping safeguards and 'immensely embarrassing' for the sport's governing body UCI. 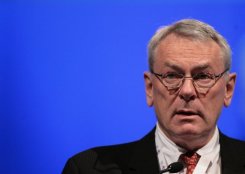 The former chairman of the World Anti-Doping Agency (WADA) Dick Pound, pictured in 2007, said Sunday that revelations of pervasive doping in cycling is a vindication of anti-doping safeguards and 'immensely embarrassing' for the sport's governing body UCI.

Dick Pound, who for years waged an intense battle against the International Cycling Union (UCI) and disgraced rider Lance Armstrong, lauded the US Anti-Doping Agency's investigation (USADA) into the supply, use and distribution of performance enhancing substances in the Armstrong case.

The ground-breaking investigation led to Armstrong being stripped of his seven Tour de France titles.

"I think USADA's report indicates what a good and serious agency can do. That's a vindication of the system," he told AFP at a WADA foundation board meeting aimed at drafting a tougher new code for anti-doping in sports.

But Pound, in his inimitable forthright manner, took aim at the UCI, whose president Pat McQuaid sat solemnly at the Montreal meetings.

"It's immensely embarrassing to the UCI that the people who are running the sport, who were there every day, seeing these athletes and teams for years and years couldn't seem to find it. And so now they are, in quotation marks, 'shocked'."

Pound acknowledged the bitter push back against efforts to clean up cheating that he received as chairman of global anti-doping body between 1999 and 2007.

"But the pushback I got was the pushback that I invited as chairman. The pushback comes from the bad guys, not from the good guys. A number of people keep saying 'keep at them' which is great, and others say 'oh you're trampling on our rights, you're against cycling, you're against football,' - well they've sort of opened their shirts and the bull's eye is right in the middle of their chest."

In response to concerns raised by delegates about the time and costs associated with effectively cracking down of the scope of cheating in sports, Pound was unequivocal in urging national governments to take responsibility.

"National governments have a huge responsibility because it's their country. They have the powers to investigate, they have the power to compel witnesses to provide evidence and so forth, which sports authorities don't. So you really need them to do that."

He also said the costs of regulation and testing could be tolerated, given the spending in other areas.

"So when you sit around and hear them talking about 'oh we're all so poor that we can't afford even a one percent increase'....it's like 12 million dollars for the world governments.

"They spend one percent on these meetings and having these dinners. I think that's the frustrating part. We have all the machinery in place, all the structures, we've got the 50-50, we've got the drug code, we've got a convention. What we need now is to get in there for the long haul and say 'okay this is what we have to do if we're going to be successful.'

"This is not rocket science. It's very easy to know what to do, that it's going to cost you a little money. You can say 'we're analyzing this' but we've taken 10 years to have a very light compliance, self assessment. To confuse the number of tests with an effective programme is nuts. We all know that."

He also urged the International Olympic Committee to take a tough love approach.

"Well I think the IOC has sort of punted to some degree to WADA. They don't really do any anti-doping tests. They do tests on occasion for the Olympics, but that's about it. They've been very good at amending their charter to say that you need to become compliant or you can't take part but they're reluctant to use that power."

"They've been saying...'well you can't exclude cycling because what about all the cyclists around the world who aren't doping?' Well, it's tough love."