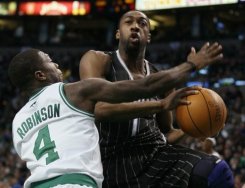 Gilbert Arenas #1 of the Orlando Magic heads for the basket as Nate Robinson #4 of the Boston Celtics defends in January last year at the TD Garden in Boston. Arenas signed with the Shanghai Sharks Monday, and will play this season for the Chinese Basketball Association club owned by retired superstar Yao Ming.

Arenas joins several other former US National Basketball Association (NBA) stars in the CBA, such as Stephon Marbury and Tracy McGrady, who have sought to prolong their stellar careers in China.

"The Shanghai Sharks basketball club has formally signed the American player Gilbert Arenas," the Sharks said in a short announcement on its website.

"He will wear the number 0 while representing Shanghai during the 2012-2013 CBA season."

No details of the contract were revealed.

Nicknamed "Agent Zero," Arenas, 30, was a three-time All Star in the NBA, but was suspended in 2009 after he brought a handgun into the locker room of the Washington Wizards who he played for at the time.

He played with the NBA Memphis Grizzlies last season.

The 17-team Chinese league season starts on Saturday, when Arenas and the Sharks meet Marbury and defending CBA champion Beijing Ducks in the capital.