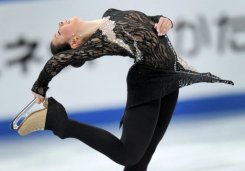 Russia's Elizaveta Tuktamysheva performs her Ladies short program during the Figure Skating Final at the ISU Grand Prix in Sochi on December 7, 2012. Tuktamysheva, the junior world championship runner-up and Youth Olympics winner, clinched her first Russian figure skating title on Thursday despite coming close to pulling out through injury.

Tuktamysheva, who won with a personal best of 196.57 points, had complained of a foot injury after her short programme and was very close to a withdrawal at the event held at the 12,000-seat Iceberg arena, the venue for the 2014 Sochi Olympics.

"I feel really bad," she said. "But it was our joint decision to skate today -- mine and my coach. It was very important for me to clinch a place at the European championships. It was my main goal of the year and I'm happy I could fulfill it."

The 13-year-old Yelena Radionova, who was third after the short programme, managed to leapfrog three-time champion Adelina Sotnikova to win silver with 191.26 points.

The reigning European champions, who grabbed the lead after the short programme, underlined their supremacy with a solid presentation of their free routine.

The winners of the ISU Grand Prix finals earlier this month scored a personal best of 228.92 points to finish 21.6 points ahead of second-placed Yuko Kavaguti and Alexander Smirnov, former three-time national champions.

"We are satisfied with our performance taking into consideration that we were both tired as the first half of the season is already behind us," Trankov said.

"We experienced a slump this season but managed to overcome it. However, we shall improve our programme and add more confidence into the presentation of both our short and free routines for the European and the world championships."