AC Milan's bid to sell Robinho to Brazilian top flight side Santos foundered early on Saturday after the clubs failed to agree on a transfer fee. 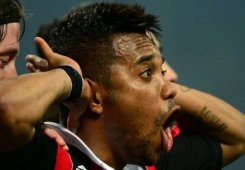 AC Milan's Brazilian forward Robinho celebrates after scoring during the Italian serie A football match between AC Milan and Juventus on November 25, 2012 at the San Siro stadium in Milan. The club's bid to sell Robinho to Brazilian top flight side Santos flounders after the clubs failed to agree on a transfer fee.

Milan have slapped a 10million euros ($13million US) price tag on the 28-year-old Brazilian international while Santos offered only seven million, according to ANSA news agency.

AC Milan coach Massimiliano Allegri said Saturday Robinho, who showed good form at the tail end of 2012 having returned from an early season injury, is now likely to stay at the club until the end of the season.

"Negotiations failed during the night, it looks like Robinho will remain with us until the end of the season," said Allegri.

Robinho had, according to Allegri, "expressed a desire to return to Brazil in the summer" and ANSA claims that another Brazilian side, Atletico Mineiro, had launched a bid only to call off talks.

Milan's former Brazilian striker Alexandre Pato on Thursday joined Brazilian side Corinthians in a four-year deal thought to be worth 15 million euros.

The Serie A giants sit seventh in Serie A, 17 points adrift of leaders Juventus, ahead of the visit of Siena on Sunday

Patty looks to leave rivals in her wake